After completing his education, Fuchs set his sights on Detroit. Fuchs accepted an illustrating job at New Center Studio, which was owned by an aggressive businessman named Art Greenwald. New Center Studio designed illustration, photography, paste-ups, and other advertisement media for Detroit’s large automobile industry. At the time, automobile industry advertising could be found in the furthest corners of the country.

After some time with New Center, Fuchs left with five others to form The Art Group in Detroit. Fuchs’s growing popularity in the advertising industry and unparalleled work ethic made The Art Group an immediate success. “Things just sort of happened,” Fuchs said. The Group needed to hire more talent because the client base grew so quickly. Before long, The Art Group was one of the largest studios in Detroit. 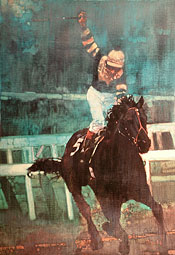 Fuchs’s smashing success only increased his appetite. He soon outgrew Detroit and headed for New York City to work as a freelance illustrator. What happened next was an exponential growth of accomplishments. By the age of 30, Fuchs was voted “Artist of the Year” by the Artists Guild of New York. He was the youngest person ever elected to the Illustrators Hall of Fame.

Fuchs’s impact on the field of illustration was significant. Then, advertisers started planning double page spreads that allowed new freedoms to illustrators, with unconventional layouts and typography. Fuchs was the leader of innovative illustration.

Fuchs illustrated the leading most profitable magazines of the time including McCall’s, Cosmopolitan, Ladies’ Home Journal, Redbook, TV Guide, The New Yorker, andSports Illustrated. He was the recipient of more than 100 awards, including the prestigious Hamilton King Award, and was commissioned to design four United States Postal Stamps.

In 1962, Fuchs was commissioned to paint the portrait of President John F. Kennedy. That portrait is now in the permanent collection of the Kennedy library. He was also invited to the White House to paint a portrait of Lyndon Johnson, which is now in the National Portrait Gallery in Washington D.C.. Fuchs painted many prominent American and international figures including Martin Luther King Jr., Queen Elizabeth, Anwar Sadat, and Presidents Gerald Ford, Jimmy Carter, and Ronald Reagan. He painted entertainers like Johnny Carson, Carol Burnett, Dan Rather, Bing Crosby, Katharine Hepburn, Clark Gable, and Sean Connery.

The illustration business was good to Fuchs, but because he had nearly conquered the field, he began to grow tired of it. “The illustration business started boring the hell out of me,” Fuchs said. “I no longer enjoyed working on the projects that I was getting.” So, when Tully Rector, president of an international film company, approached Fuchs about filming commercials, he left illustration behind to fully immerse himself in filmmaking. During this time, Fuchs filmed commercials and industrial films, doing whatever it took to capture unique camera shots. His creativity in film earned him awards from the Art Directors Club for a commercial for Mountain Dew.

Fuchs also illustrated books. His first book illustration was published by Reader’s Digest. Several of the books he illustrated were reproduced classics such as Ernest Hemingway’s A Farewell to Arms. Fuchs also wrote and illustrated his own work of fiction.Ride Like the Wind, A Tale of the Pony Expresswas published in 2004.

Fuchs’s creative arm also reached into the field of teaching. Fuchs joined the faculty of the Famous Artists School at the suggestion of friend and prominent illustrator Austin Briggs. After leaving the Famous Artists School, Fuchs was one of the founders of the Illustrators Workshop. Fuchs eventually lost his interest in teaching a new generation of illustrators. He said, “When I was an illustrator I was always working toward a goal, such as illustrating for magazines. By 1985, the goals were just about gone. People had no goals to inspire them to work long hours, and I couldn’t mislead them into thinking that they were going to find satisfying long-term careers in this field.”

Fuchs began specializing in sports illustration during the 1960s. He was known for going to great lengths to achieve the most authentic representation of sports themes. Fuchs stood behind a net while Sandy Koufax threw a ball directly at him. He stood behind a plexiglass barrier while Gordie Howe shot a puck at him.

Because of this willingness to get so close to his subjects, and a “dynamic, impressionistic style and use of light [that] seemed to capture the action of sports in a particularly effective way,” Fuchs was able to create genuine representations of the human body in motion. He has been called the “most successful sports illustrator of the second half of the 20th Century.” Fuchs was commissioned to do work for the Indianapolis 500, the running of the bulls in Pamplona, and portraits of Muhammad Ali, Wilt Chamberlain, Arnold Palmer, Jack Nicklaus, and Reggie Jackson to name a few.

His limited edition prints are displayed in the PGA World Hall of Fame. In an article forAmerican Artist magazine titled “Art in Sports,” Ervine Metzl said of Fuchs’s work “his golf tournament is a blaze of movement in which the stroke is so dominant that the player himself is only part of the stroke.”