Hungarian sculptor, Ferenc Németh earned his degree in architecture before receiving a fine arts degree. Initially, he was initially influenced by the analytic cubist style, rooted in Paul Cézanne’s reduction of natural forms into component planes. 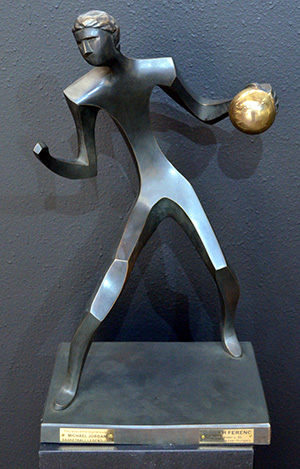 “The first decade of my art life was spent in pursuit of my own style.” In his pursuit, he was eventually drawn to the significant cubist sculptures emerging from Prague and Russia in the mid-1920’s. The bronze sports sculptures in this exhibition are representative of this post-World War I “Cubo-Futurist” style.

Two of his exhibited works were purchased by the president of International Olympic Committee Juan Antonio Samaranch, the other by the museum of International Olympic Committee. “This event meant for me that Gods appointed sport as the subject of my works, and cubist figure form as my style. My works made in this spirit have earned the praise of a lot of internationally famous people. For the Athens Olympic Games I created the street statue of “Olympic Pleasure” as a gift from my country. This work of mine was placed on the scene of ancient Olympics a few hundred meters from, but within sight of, the place where the Olympic Fire is lit every second year. I would also like to mention that in my career I always make my work in unique specimen.”

The sculptures in this exhibit are but a few of 179 total sculptures Ferenc Németh will be donating to the American Sport Art Museum. The United States Sport Academy is honored to have been chosen by such a renowned, international artist for his generous donation.