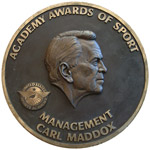 CRITERIA: The Carl Maddox Sport Management Award, named in honor of the former Athletic Director of Louisiana State University and Mississippi State University, Corbet Award Winner and United States Sports Academy Board of Trustees member, is given annually to an individual for his/her contributions to the growth and development of sport enterprise through effective management practices. The individual should exhibit mastery of all the management functions, be well known in the sport arena, and have an abiding belief in the need for ethical behavior in sport management.

Carl Maddox has served as the Athletic Director at L.S.U. in Baton Rouge, where he helped build the Tigers into a national power in collegiate sport. Later, Maddox moved to M.S.U., where he helped right an erratic and weak athletic program. A likable man of integrity, Maddox is well-respected among his peers, winning the James Corbet Award, given annually by the NACDA to the outstanding athletic director in the United States. As a board member at the Academy, Maddox has helped steer the institution through accreditation in its master’s program and to candidacy at the doctoral level. For his generous contribution, Maddox was awarded an honorary doctorate from the Academy.