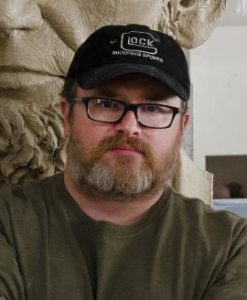 A British born American sculptor known internationally for his realistic and engaging bronzes of people, Steven Whyte has received acclaim for his highly detailed and stirring works on the dynamic spectacle of athleticism.

Some of his most visible and well-known works include his 13-foot monument of 1957 Heisman Trophy winner John David Crow for Texas A&M University, the first Heisman winner in the storied history of Aggie football. The work is now a focal point at Texas A&M’s Kyle Field.

The success of the Crow sculpture won Whyte a second commission with Texas A&M for a monument to the tradition of their ferociously dedicated student fans, referred to as the “12th Man.” The “War Hymn Memorial” is a slightly larger than life-sized monument in which twelve A&M students are linking shoulders and feet in the midst of their “War Hymn cheer.” The 36-foot-long work now graces the entrance to Kyle Field stadium. 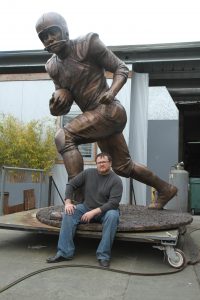 “I am primarily a sculptor of people, a historian, recording a likeness and creating characters of yesterday’s community and today’s society for tomorrow’s viewer,” Whyte said.

Born in Amesbury, England, Whyte was the only undergraduate student ever accepted to the prestigious Sir Henry Dalton School of Sculpture. He taught at Stafford College and continued to hone his craft. At age 24 to become the youngest-ever member of the London based Society of Portrait Sculptors. The artist was elected vice president of the prestigious organization and worked in tandem with the sculptor to the British Royal Family.

In 2003 Whyte relocated from England to the United States and currently operates an open studio and gallery in the coastal town of Carmel, Calif., one of the most respected artistic communities in the nation. He regularly shares the creative process with visitors as he sculpts from his Steven Whyte Sculpture Studio, which has become a destination and landmark for art lovers from around the world.