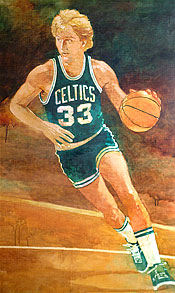 If what he says is true, that “Being an artist is probably one of the neatest things that can happen to a person,” then 1986 Sport Artist of the Year Bart Forbes has lived one of the “neatest” lives of all. A list of Forbes’ sport art reads like a timeline of major sports history. From the Kentucky Derby, the New York and Boston marathons, the Indianapolis 500, and three different Olympic Games, Forbes’ art has been the visual symbol of many great individuals and unforgettable moments. Simply put, Bart Forbes is a sought-after and well recognized sport art icon.

Though he did not start painting until college, Forbes remembers drawing stickmen on the flyleaf of his children’s books when he was three or four years old. “I can’t remember when I didn’t want to be an artist,” he said. Forbes’ parents were supportive of his drive to become an artist, and cultivated his talents. But, like so many young people in the United States, Forbes’ first experiences with sport were also a way of connecting with his father. At the age of seven, Ted Forbes, Bart Forbes’ father, took him to his first major league baseball game at the legendary Wrigley Field in Chicago. His second big league experience came several years later at the Cincinnati Reds’ Crosley Field when Forbes was in high school. The nostalgia of baseball is something Forbes never escaped, and it later manifested in his paintings and his affinity for collecting baseballs with Hall of Famers’ signatures including Babe Ruth, and his personal favorite, Ty Cobb. Forbes’ father also introduced the young artist to the sport of golf, which would eventually become his favorite sport and the subject of some of his most recognized paintings. 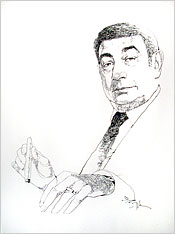 Growing up in an Air Force family made Forbes accustomed to travel. Though he was born in Oklahoma, he moved to Cincinnati, Ohio while in high school, graduated from the University of North Carolina, and completed graduate work at the Art Center College of Design in Los Angeles. His prestigious career in art began in the form of the covers of albums and paperback books.

In correspondence with Academy President and CEO Dr. Thomas P. Rosandich, 1985 Sport Artist of the Year Donald Moss nominated Bart Forbes for the 1986 Sport Artist of the Year distinction. Moss wrote that Forbes was both “extremely talented and well deserving” of the award. Forbes’ body of work was reviewed and approved as an important contribution to the world of sport art. American Sport Art Museum and Archives (ASMA) Advisory Board Member John Counts said that “Mr. Forbes has demonstrated a strong interest in sports through his vivid style of painting.” Thus, Forbes was given the award. He then donated 16 original drawings to ASAMA, several recognizable prints, lithographs, and an original oil on canvas of Boston Celtics’ Larry Bird, which now hangs on the wall of the Sport Artist Hall of Fame. His donations contributed to the growing ASAMA collection, bolstering its reputation to what it is today: arguably the largest collection of sport art in the world.

Forbes reminds us that “the Lord gives all of us opportunities, whether we’re farmers or artists or lawyers or doctors or just people who want something else out of life.” This philosophy is embodied in his artwork and is consistent with the mission of the United States Sports Academy, “to prepare men and women for careers in the profession of sports,” to pursue that opportunity, that something else out of life. Whether it be his self-portrait sketch hanging in a wing of the Academy, the oil painting of Larry Bird on the wall of the Sport Artist Hall of Fame, or the painting of the 1996 Men’s Olympic Basketball Team hanging in the Academy’s Academic Conference Room, the sport art of 1986 Sport Artist of the Year Bart Forbes gives visitors to ASAMA and Academy students alike something significant to rally around.