Forbes is known for his work with watercolor and oils. His art has been called “unique,” “loose and realistic,” and the nature of his style makes his paintings “very identifiable.”2 His commissions include the official paintings for the Kentucky Derby, Indianapolis 500, the America’s Cup, the Westminster Dog Show, the Boston and New York Marathons, numerous watercolors for World Championship Tennis, and posters for the Byron Nelson Golf Tournament. Forbes has designed more than 20 postage stamps for the US Postal Service, one of which was a nostalgic and charming Lou Gehrig commemorative. His distinctive style has been featured in magazines such as Time, Sports Illustrated, McCalls, Boy’s Life, Redbook, TV Guide, and others. 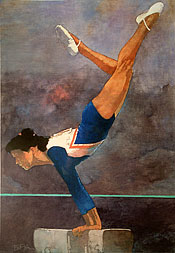 Commissioned paintings were largely a part of how Forbes was able to lead the “neatest” life. Most of his work was commissioned, and he knew how to please his clients. “I paint to meet the needs of my clients… and still satisfy myself,” Forbes said.1 “My gallery painting is completely different. I like to experiment, paint more loosely, more abstract.”1 But, though he worked mostly with watercolor through college, it was commissioned work that brought Forbes to working with oils. “I worked for a number of years in watercolor exclusively,” Forbes said.1 “Some time back I was asked to do some very large paintings, but they were too large to do in watercolor.”1 So, Forbes primed a piece of masonite and painted it with oils. “I chose oil and found as I started painting, I could do things that I couldn’t with watercolors,” he said.1 With this oscillating versatility in mediums, Forbes became an indispensable commercial commodity. His corporate clients are a roster of business giants: NBC, GE, ESPN, ABC-TV, Exxon, Pepsi-Cola, Kodak, Miller Brewing, RCA, Marlboro, Phillips Petroleum, Sony, Anheuser-Busch, and Proctor and Gamble for starters. Forbes also enjoyed a 15-year affiliation with the NFL, and as the theme artist for Super Bowl IX.

In 1988, Forbes was selected by the International Olympic Commission (IOC) as the Official Artist for the Games of the XXIV Olympiad in Seoul, Korea. This was a very significant Olympic Games for athletics and politics, and especially for Forbes. He was commissioned to paint 2 X 3 foot oil sketches of each sport and the opening and closing ceremonies. Forbes visited Korea twice for the Games, once before, and once during the Games. While at the Games, Forbes had planned to spend most of his time there sketching. But, when he opened his sketchbook and began to draw, “crowds of curious onlookers would appear, making concentration difficult,” he said.1 So, Forbes depended upon his camera and telephoto lens to shoot hundreds of slides, as many as possible for each event. The result was 26 canvases and a rapidly growing, yet already established reputation as a premier sport artist. Based on this and other work, the U.S. Olympic Committee commissioned Forbes for the official art of both the 1992 Games of the XXV Olympiad in Barcelona, Spain and the 1996 Games of the XXVI Olympiad in Atlanta, Georgia.

In addition to the many paintings available for viewing at the American Sport Art Museum and Archives (ASAMA), Forbes’ paintings grace the walls of private collections belonging to the Smithsonian Institute, former Presidents Jimmy Carter, Ronald Reagan, and George H.W. Bush, Arnold Palmer, Pat Summerall, Tiger Woods, and Ben Hogan. His paintings may also be found in the NFL and PGA Halls of Fame, the Dallas Cowboys owner Jerry Jones’ private jet, and the Atlanta Braves Hall of Fame. Forbes painted Pebble Beach, the Players Championship, and the Ryder Cup for the PGA Tour, Hockey goalie Martin Brodeur for the New Jersey Devils, and mural-size canvasses for the PGA’s TPC Clubhouse at Sawgrass. His paintings include “nearly every major boxing match” including Ali versus Holmes, Hagler versus Hearns, and Leonard vs. Hearns. With all of these achievements, it is no wonder Forbes has received over 50 awards of excellence from the New York Society of Illustrators. A photographic collection of his sport art is available in his book, The Sport Art of Bart Forbes (1998, Beckett Publications).