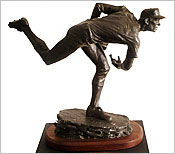 Graduation from high school was not the end for Buswell’s involvement in sports. Accepted to Ricks College in Rexburg Idaho on art, academic, and athletic scholarships, he majored in art, and was an all-conference running back and most valuable player in football. The same year he was an all-conference sprinter, all in addition to being named the school’s top art student.

Buswell studied illustration at Utah State University, and then transferred to Brigham Young University where he majored in Secondary Art Education on an art scholarship with a special emphasis in sculpture. While at Brigham Young, Buswell was named the top sculpture student while at the same time playing on the nationally ranked football team from 1979-1981. Buswell received the “Invisible Award” from the football team “for a player who wasn’t a starter, but a good influence on both players and coaches.” He was also given the “Scholarly Athlete Award” for what he achieved outside of football. His senior year, he was hired to teach sculpture at BYU and taught beginning and advanced sculpture there for the next four years. 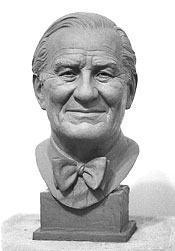 Since graduating from BYU, Buswell has worked as a professional sculptor and continues to do so today.