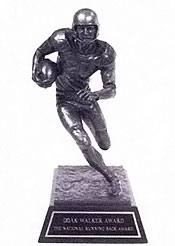 Buswell’s big break came when he met Coach Bill Walsh of the San Francisco 49ers. Upon seeing one of Buswell’s sculptures at a BYU annual sports awards banquet, Walsh asked Buswell to do a special piece of sculpture for the 49ers. Later, Walsh introduced Buswell to the directors of the Pro Football Hall of Fame.

That introduction would prove to be a valuable one. Buswell was hired by the Hall in 1982 and has created more than 70 busts of the new inductees for the Pro Football Hall of Fame in Canton, Ohio. Buswell said, “A big highlight of my career is getting to know the Hall of Famers in many sports. I make sure I meet each person before I begin a work. They all pose for me. If they don’t come here, I will go there. Some sculptors work strictly by pictures. If I did that I wouldn’t be able to do as good a job and it wouldn’t be as much fun for me.”

Later, he was named the Pro Football Hall of Fame’s chief sculptor. From his first bust of Sid Gillman, to stars like Joe Montana, John Madden, and Barry Sanders, Buswell got to see a side of many sports greats that few other people see.

While talking to a reporter from The Star-Ledger in New Jersey, Buswell discussed the process of preparing pro football legends for that day they all dream of — that moment when their bust is enshrined forever, for the entire football world to see.

“My job is to make it so they’re comfortable with what we have done during the posing session, i.e. expression and likeness, so they’re not shocked or surprised on their big day,” Buswell said. “The bust is going to be there a long time.”

Some of Buswell’s over-life size monuments include Mickey Mantle hitting one of his 52 home runs on his way to winning the Triple Crown in 1956, Jack Nicklaus making the winning putt to win his sixth Masters in 1986 commissioned for the Georgia Golf Hall of Fame in Augusta, Oscar Robertson for the University of Cincinnati, and Doak Walker for Southern Methodist University. He was recently commissioned to sculpt monuments honoring Coach Robert Neyland for the University of Tennessee and Merlin Olsen for Utah State University.

Buswell loves the journey of learning and is always looking for ways to improve his skills. He does this by studying with other professional artists. Always the student as well as the teacher, Buswell willingly participates in critical review with other respected professionals and at the same time he freely shares his knowledge and eye for design with others.