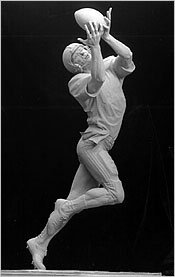 Buswell’s bronze sculptures are more than a mere representation of a familiar sports figure or sports moment. He likes to capture the gesture, mood, and expression of a person in thought or the intensity of the moment of an athlete in action. “I have to get to know and study the person I do a sculpture of,” Buswell said.

Buswell feels that having experienced the thrill of sports first-hand gives him an important perspective to capture the intensity, competitiveness and motion of an athletic moment. But, he says, it takes more than that. “You have to capture more than the action or moment,” Buswell said. “It’s more like ballet. There’s an art form in sports when you capture a certain moment when a graceful athlete is doing his thing at the highest level—whether it’s a finger-tip catch or a homerun swing.” 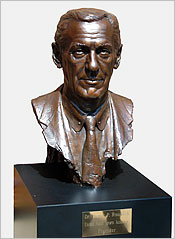 Buswell has stayed closely affiliated with the United States Sports Academy and was later commissioned by the Academy to design the “Order of the Eagle Exemplar” Medallion given to each recipient of the American Sport Art Museum and Archives’ Awards of Sport. The Medallion design is still being used today. Buswell was most recently commissioned to create a medallion for Zhenliang He Culture Award, which is presented to the Sport Artist of the Year. He has also sculpted a life-size bust of the Academy’s president, Dr. Thomas P. Rosandich, which is on display at the Academy.