“My first ambition before becoming an artist was to be an archeologist. I love to search for ancient relics and display them in a new light.” ~ Bruce Larsen 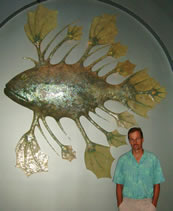 Salvaging ancient relics to showcase them in a new and greener light is one of the basic aims of Repo-Renaissance art, or Classical sculpture made from recycled materials. The materials may be tossed off relics from the 20th century. However, the artistic skill and trained vision that transform the found objects into graceful, muscular giants whose steel parts seem to breathe and stretch are gifts of knowledge and training from 15th century Renaissance masters who revered ancient Greek art.

Larsen’s eclectic, green art style is reflected in the woodsy studio where he builds much of his work. Turning off a pine tree lined road to meander down a wide dirt driveway, a guest passes by a hand-built, Thai-curve-roofed, one-room building reminiscent of a Victorian architectural folly. This is the first hint that you’re not on everyday, suburban, Alabama turf anymore. You’re entering Larsen’s world of visionary transformation.

“Everything in life is recycled.” ~ Bruce Larsen

The main house rises skyward to the left of the drive, perched on tall, 10 inch thick wood posts, giving it the air of one of the sculptor’s oversized found object creatures. The home’s first floor floats bird’s nest level12 feet above ground, accessible by 22 steps punctuated with landings and decks. The long supporting pillars to this hand-built house plunge eight feet down into the layers of Alabama red clay and sand covering of his four-acre compound. Larsen raised the house after the disastrous wake of Hurricane Danny flooded it. Now Larsen, his wife, Joy, and their three children call this cozy, oversized tree house, home. To this “work in progress,” he plans to add a higher floor, plus a taller tower already claimed for occupancy by his teenage sons.

As sheltering as the giant legs of one of Larsen’s monolithic sculptures, the foundation posts support a roof over the hoard of metal objects strewn about the ground floor area. The 1,200 square feet space functions as Larsen’s open-air sculpture studio where he can frequently be found working with assistant artists, Julia Greer and nephew, Nils Larsen. The workshop is packed with hunky or spiky metal objects of every description — some identifiable as outboard motors, whole rusted motorcycles, bicycles, automobile chunks, tractor parts, and pipes of all sizes — plus some of now indeterminate origin in the form of metal globes, grates, gears, and gangly gadgets. All wait like limbs in a bionic storage facility to become part of a Larsen construction when they will take on a new life and new meaning. Larsen’s personal philosophy is as eclectic and inclusive as his work. 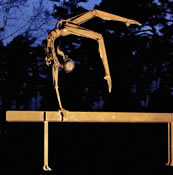 “My dad is an atheist, and my mother is a Methodist. I would say that I am deeply spiritual even though I don’t necessarily claim one religion. I believe in karma, that everything in life is connected, and we need to try to make this crazy world better.” ~ Bruce Larsen

Born in Birmingham, studying at Auburn University, and now based near the small town of Fairhope, Larsen’s Alabama roots are strong. When in high school he trained with famed swim coach, Eddie Reese, the former coach of Olympic star, Michael Phelps. An avid athlete, Larsen naturally combines art and sport, either depicting famous sports stars or using his physical balance and sensitivity to impart grace and movement to his massive steel constructions.

“When I was very young, sports gave me my ability to focus. I learned to work hard from swim training. Now I simply outwork my competition.” ~ Bruce Larsen

When Larsen took some time out from his university studies, his art work took a productive side trip on the New Jersey beaches. Larsen opened an air-brush shop in which he painted fantasy images on motorcycles, boats, and t-shirts. His imaginative work caught the eye of east coast surfing pioneer, Dan Heritage, who hired Larsen to paint surfboards. Combining sports and art proved to be profitable and a boost to his professional reputation as Heritage’s surf boards became highly sought after and legendary in the surfing community. Larsen eventually returned to Auburn to complete his Bachelor of Fine Arts in Illustration degree in 1987. For several years after university, Larsen lived and worked in Atlanta as an animator and commercial sculptor for advertising. Then Alabama and the fine arts drew him back, and he and his wife and children established a home near Fairhope. 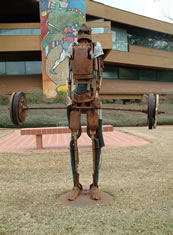 “To the typical movie-goer in 1979, the film Alien was innovative and scary in its special effects. To 20 year-old Larsen, it was a crucial moment in his artistic development. In addition to influences from Fantasy artists such as Tom Woodruff and Roger Dean, Alien’s techniques would contribute to his flair for bizarre and beautiful found art.” ~ Tobin Terry

While enriched by his Southern roots, Larsen sees himself as a citizen of the world. Through his art, he can work locally and think globally. Larsen has donated many sculptures to community parks. Farther afield, public buildings in China, Bahrain, Switzerland, Germany, Italy, East Timor, and Malaysia all display some of Larsen’s impressive sculptures. In 2002, Larsen received an Alabama Artist Award for sculpture at the Huntsville Museum of Art. In 2003, Larsen entered a piece in the national Olympic Art competition. This brought his work to the attention of the United States Sports Academy and led to an ongoing working relationship with President and CEO, Dr. Thomas P. Rosandich. In 2009, Larsen was presented with the Sport Artist of the Year award from the American Sport Art Museum and Archives. Many museums, galleries, and private collections around the globe showcase impressive artworks by Larsen. 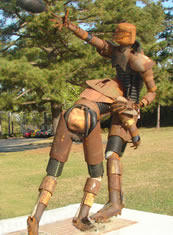 Larsen credits his Norwegian explorer ancestry as the source of his hunger for travel and his love of many kinds of sports, including hang gliding, motorcycling, sky diving, and scuba diving. He enjoys working on location to install a sculpture wherever it will stand. Larsen has a special affection for the people and country of Kazakhstan where he traveled in 2003 to work on special effects for the film, Nomad, the Warrior.

Among the many special effects projects and animatronics that Larsen has completed for Hollywood films are his works for The Patriot in 2000, Planet of the Apes in 2001, Dumb and Dumber in 2003, Dreamer in 2005, Ruffian in 2007, Black Knight, and National Geographic’s Wreck of the Sunset Limited in 2008.

“I love to travel. I can feel at home all over the world. I’ve risked my safety a lot in sports but I have strong bones and good reflexes and I’m still here. I think that means I’m not done yet with my unique purpose. I think a big part of that includes being a father to my wonderful kids and continuing my art.” ~ Bruce Larsen

In May and June of 2010, visitors to the Carnegie Visual Arts Center in Decatur, Alabama are able to view Larsen’s series titled, Transformations, that includes found object sculptures of dinosaurs. The facility is part of a complex with a library originally funded in 1904 by philanthropist Andrew Carnegie.

Also in 2010, Larsen unveiled the first two figures in The Iron Bowl Monument, a work projected to become one of Alabama’s largest public sculptures. More football player figures will be added to enlarge the scene over the years. Erected within the outdoor sculpture park of the United States Sports Academy campus, The Iron Bowl Monument celebrates the heated rivalry between the University of Alabama and Auburn University football teams. A special ceremony to dedicate the sculpture featured the Head Football Coach of the University of Alabama, Nick Saban, and two famed former centers, the Crimson Tides’ Gaylon McCollough and the Auburn Tiger’s Jackie Burkett. Larsen created the larger-than-life sculpture figures from black drainage pipe and steel, with propane tanks for helmets. The life energy that seems to sparkle from each portion of Larsen’s works comes from the former lives of the relics and from Larsen’s powerful artistic vision.

“The tanks are very carefully dealt with, I tell you that. The valves are removed and the tanks filled with water before they are welded to the sculpture. The players’ hands are made from various tools and pieces of pipe. The trick is getting a lot of life into them, even the toes.” ~ Bruce Larsen