“I hope to be always allowed to be an international artist to mark an exceptional historic era… a moment charged with an exalted understanding between nationalities, races, cultures, and religions.” ~ Charles Billich, Millennium Almanac, Billich Gallery; p.10 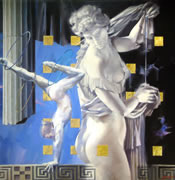 Born in Yugoslavia, educated in Austria, working worldwide from China to the U.S.A. and France, while keeping a main residence in Australia, Charles Billich is a prolific artist and enthusiastic world citizen. It is fitting that his distinguished Primio Pittura 2009 award from the Firenze Biennale originates from Italy, the world’s unofficial spiritual capital of art. Each chapter in Billich’s life seems to be drawn from a saga of many personal paradises lost and found.

The land of Istria, where Charles Billich was born September 6, 1934, has become today as dreamlike and many layered as the artist’s signature paintings of fantastic cityscapes. In the early 20th century, Istria thrived as a small eastern section of Italy, a crossroads of several larger countries. Typically cosmopolitan of their times, the boy’s family members conversed easily in Italian, Venetian, Croatian, and German. The dynamic aesthetic of the day was revolutionized by the new Art Deco style with its Futurist branch. Cultural cross-fertilization was a way of life. 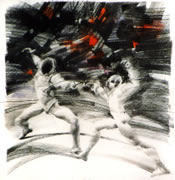 The young boy’s rich world was splintered by, as Billich puts it, “a plot between Roosevelt and Stalin,” when a 1945 U. S.-Russia treaty erased Istria and annexed it alongside neighboring territories into the newly formed Yugoslavia. Now behind the Communist Iron Curtain, Billich’s world became highly restricted and policed, yet Billich continued to pursue his youthful artistic interests. He studied humanities and drawing at the Classical Lyceum, writing articles for unconventional local magazines in his free time. He was accepted by the Rijeka Opera Corp of Ballet that provided an exhilarating dancing career that remains central to his artistic inspiration to this day.

““I still take around the world my inventory of metaphysical choreographic ideas based on ballet. Absurd hyperbolae which include exaggerations on human limits but exclude gravity.” ~ Charles Billich, Millennium Almanac, Billich Gallery; p.9 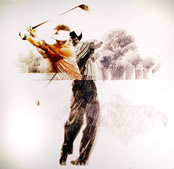 In 1952, when some of his anti-Communist writings came to the police’s attention, Billich attempted to flee to Italy. On the testimony of his girlfriend who turned out to be an informant for the state security service, he was arrested and sentenced to ten years in Maribor prison. Ironically, this difficult time provided him with the invaluable mentorship of many great intellectuals of the day who were fellow political prisoners. From this exalted prison company, Billich learned more languages, art history, the contemplation of spiritual questions, and practical life skills. Recruited to construct scenes for the inmates’ theater, he also began his passionate involvement with the fantasy art of set design.

“I never painted the conditions of that episode… I disliked social realism, which I perceived as an arm of official propaganda.” ~ Charles Billich, Millennium Almanac, Billich Gallery; p.9

After surviving two years of hunger, cold, and sadism, Billich experienced “the finest anecdote of my life… the most irrepressive joy… a sudden, unexpected, outright amnesty” that was engineered by the Red Cross – and Billich was freed from prison. He decided to devote himself to painting and to initiate a new life on the world stage based on the inspirations gained from his introspective prison years. He fled to Salzburg, Austria.

“In this town, perhaps stimulated by its Baroque miracles, picturesque scenes, and urban beauty, I came to feel I had a certain gift, granted by God… I decided upon the life of an artist.”  ~ Billich, Billich Foundation; p.6

Long winters and provincialism eventually eroded Billich’s preference for Salzburg as home base. He boarded a ship bound for Australia where he thought a fresh atmosphere would inspire him. Billich passed the fifty days of the sea journey learning English. He arrived in Australia while the Olympics were being held in Melbourne and took a job as a multi-lingual translator for the Ministry of Immigration in Victoria. Art’s persistent sirens lured him away from secure and conventional paths. Billich quit translating and enrolled in the National Gallery Art School where curriculum was based on the Socratic Method which questions each event in order to find lessons for improvement, a process that has stayed with him.

“I never say, ‘Hey that’s fine; that’s a great painting!’ but rather, ‘Where did I go wrong?’ This feeling of doubt always plagues me, forcing me to work as much and as long as possible, in hope of extracting the occasional diamond from so many tons of sludge.” ~ Billich, Billich Foundation; p.6

An opportunity arose for Billich to provide paintings for French film director, Roger Vadim, to use in his film, “Night Games.” Filming took place in Manila, The Philippines, where Billich became absorbed into an exotic society of artists and patrons. His paintings attracted international attention and brought him an invitation to exhibit at the 1983 International Festival of Two Worlds held in Spoleto, Italy. In 1987, his work received the distinguished Spoleto prize.

“My concept of quintessential urban research was born in Spoleto itself, whose city walls contain such extraordinary gems. The secret components and monuments of this city were brought to light and exposed, ignoring the city walls… This manipulation of reality had entered into my blood, and I had begun to treat other larger and more modern cities in the same manner.” ~ Billich, Billich Foundation; p.8

In 1988, Billich was chosen as an official painter of the Bicentennial Commemoration of the establishment of the Australian colony. For research, Billich sailed along the route of the original ships sent from England to found Australia. He had to learn to climb the masts of sailing ships while carrying bundles of painting equipment and be able to paint nautical scenes under rocking ocean conditions. These experiences would add immediacy and veracity to his later paintings of Olympic sailboats and international races.

In 1990, Billich’s path circled back to his birthplace when he worked in Post-Communist Croatia as a guest artist in the atelier, Lotrscak Tower. During the many twists in his journey, Billich had developed his craft, clarified his unique aesthetic view, and become an international citizen. For his skilled celebration of the interrelation of art and athletics, he was selected as the 2000 Sport Artist of the Year by the United States Sports Academy in Alabama. In 2004, Billich’s paintings went on display at the United Nations, New York.

His art works are held in the most illustrious collections and museums around the world, from the Australian Embassy, Japan, and The Royal Collection of Thailand, to the Vatican, “an artist’s heaven.” Billich’s early experience of the tragedy of losing basic freedoms has inspired him to live a rich life to the fullest. He believes that art is a profound ambassador of peace. Describing himself as, “an itinerant artist,” Billich has become a troubadour of contemporary art, travelling the globe, spreading his visions of multi-cultural pollination and harmony along his way.

“Let us appreciate… the freedoms hard won over time, freedom from walls and boundaries but mainly freedom of thought and expression. Let us revisit, update and celebrate our historic diversity and pictorial legacy.” ~ Charles Billich, 2009 Christmas card