“There is a touch of irony in what I paint as there is in all Surrealist art.” ~ Charles Billich 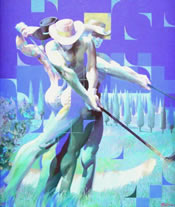 As a travelling minstrel of the healing powers of the visual arts Billich sometimes takes the role of the iconoclastic prankster whose mission it is to shake our assumptions, to make us laugh and cry and celebrate our mixed up world. Billich encourages us to examine civilization through art by painting portraits of complex, conglomerate cities that contain elements ancient, current, and futuristic. These time-lapse images illustrate how a place and our lives in it are made up of every moment of its conceptual and actual existence. Surrealism, a movement founded in the 1920s on the power of fusing waking and dream realities, is the appropriate style for such a pursuit. At the same time, Billich aims to step beyond a single category to present new images uniquely of our age.

“Billich’s break with traditionalism and the avant-garde is truly significant for our age… in collusion neither with tradition, as seen from the European point of view, nor the international avant-garde… Billich’s painting can only be accepted on the level of the present.” ~ Josip Depolo, Art Critic & Art Historian, Millennium Almanac, Billich Gallery; p.1 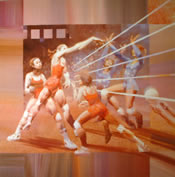 After the abstract art revolution of the early 20th century, figurative art re-emerged in the late 1900s. With the appearance of conceptualism and renewed popularity of symbolic art at the beginning of the 1980s, the major battle of the avant-garde was lost. In the stage of faddish disintegration, the last lines of its historical chapter were being written. Billich’s urban fantasy images provided an appropriate setting for this operatic saga. He devised multi-faceted portraits of cities busy with people engaged in re-defining contemporary life. 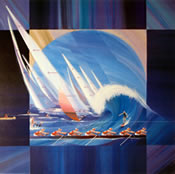 The driving force in Billich’s paintings is the dynamic scope of crumbling and emerging civilizations where any clinging to one static, eternal viewpoint is fatal. Billich paints scenes from the industrial era inhabited by athletes, models, and artists in the process of remodeling the world. 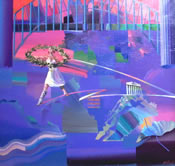 Billich draws on his ballet training for imagery to express the combined celebratory pageantry and inescapable fading of every precious moment and civilization.

“Dancing scenes have an isolated and prominent position in Billich’s paintings, not merely because of the painter’s past in the ballet of the Rijeka Theater, but also because of the symbolic meaning the painter gives to the pas de deux of our civilization… Our dancing steps are the equivalent of the unforeseen fate leading us to the moment when all the bright lights will be turned off… on the glittering stage of our civilization… These scenes… belong to the painter’s poetic being and his dramatic vision of Balzac’s human comedy, with which Billich’s painting is also interwoven.” ~ Josip Depolo, Art Critic & Art Historian, Millennium Almanac, Billich Gallery; p.6

Though the artist’s optimism is hard won, Billich perists in his view that the future is glorious and art can be one of our most powerful allies in the struggle.

.“In all his work, (he) continues his rigorous search for the inner meaning of the composition, in all the forms to which he molds it… In a continual movement of stimuli, the emotional tension of Billich’s canvases plunges into compassion, while the heavens shatter into a myriad of tonal harmonies, and space becomes fixed in a metaphysical state… a window opening onto… a tomorrow that is free and full of vitality… He follows the principle that art must satisfy very precise requirements, not the least that of offering strength in the face of life’s tensions and support against the harshness of alienation.” ~ Franca Calzavacca, Millennium Almanac, Billich Gallery; p.7-8

Influences from Cubist and Metaphysical styles are evident in Billich’s works. Both these styles contain elements that further the aims of Surrealists to portray symbolic dream images. In Billich’s masterful series, Bing Mah Yong, created for the 2008 Olympics held in China, the clay figures from ancient Chinese tombs come to life in poses of various sports. These are not ghoulish ghosts back to haunt us but friendly genies out to help us learn in the present from the glories of the past. The same mood transformation is evident in Billich’s cityscapes. The fractured imaginary cities are as impressive and realistic as the unsettling, nightmare streets laid bare by the influential Metaphysical Spanish painter, Giorgio de Chirico. However, they are made happily inspirational by the use of the soft brush strokes, cozy crowding, and warm Mediterranean palette of Cezanne’s Cubist hillside villages.

One of Billich’s key roles in the development of contemporary art is that of reviving and subsequently remaking the place of figurative art as a voice of the present and future. The Abstract painters of the early 20th century wanted to eliminate all recognizable associations from their paintings and convey their messages with pure non-realistic forms. This effort was a negation of representational forms and presented a dominantly negative conceptual tone. Most early industrial era scenes presented cities as breeding grounds for the destruction of society’s humane qualities. Billich resurrected representational form and put it to new use in the service of a positive world view. He believes that within the freedom of possibilities of Post-Modernism, “formal art is the true link between past and future art.”

“Billich’s mysterious and enigmatic ‘city’ suspends the drama of a solitude from which there is no escape, and offers in its place a return to the possibility of reconstructed social relationships in our daily lives, while the bonds are loosened and the robots melt in the sun of humanism redeemed.”~  Franca Calzavacca, Millennium Almanac; p.8

Billich states that “I do what I do because I’m driven,” and that drive comes largely from his desire to correct the chronic ills of society that stifled his early artistic endeavors. He creates new world images in his paintings and sculptures to inspire others to join the quest.

“I try to convey spiritual optimism and vitality; visual utopias. I want people to look higher, as much for their own sake as for the sake of the community.”