“A Surrealist on Olympus” – 2001 Sport Artist of the Year

“Painting is a language that I need to speak. Human nature reveals all the landscapes of the world. When I paint humans, I paint nature.” ~ Daniel You

If the magnificent and mischievous gods of ancient Greece had had their images recorded by a court artist on Mt. Olympus, the resulting portraits surely would have looked like the superb sports paintings by the French artist, Daniel You. His focus is on people, and his Surrealist portraits of mythic beings include symbolic glimpses of these imaginary gods’ defining stories, their strivings, triumphs and adversities. The issues raised from contemplating You’s works have the scope and relevance of a Greek tragedy. His paintings of bionically perfect bodies are at once immensely powerful, ecstatically erotic, and mysteriously sad. They pose more questions than answers to the conundrum of human existence. Precisely because these alluring images of physical perfection are freeze-framed in You’s paintings, they evoke meditations on movement, on the bittersweet speed of time and the fleeting nature of power and beauty.

Of French and Vietnamese heritage,You (pronounced yoh) spends part of the year in France and part in Vietnam, as well as travelling the globe to pursue different aspects of his work. He finds that immersing himself into a variety of art forms fuels his creativity. Acting is particularly inspiring because the new points of view experienced when he plays different characters enrich his paintings. As a result of a worldwide search for a sophisticated actor with both Vietnamese and European sensibilities,You was chosen for a key role in the film, Saigon Eclipse, released in 2007. Directed by Othello Khanh, the film won the Houston WorldFest International Film Special Jury Prize and was honored with Official Selection at both Shanghai International Film Festival and Los Angeles Asian Pacific Film Festival.

“An artist needs to understand different people and occupations and live a variety of experiences in order for his art to grow. I love to be other characters when I am an actor in a film because then I can take the experience to my work.” ~ Daniel You 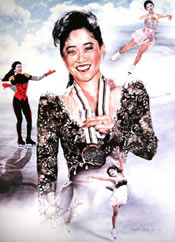 You began drawing and painting as a child. As a young man, You started his career as a designer of commercial art for posters, especially travel posters and sports posters promoting popular athletic events. You also worked designing furniture as well as logos for businesses. A keen interest in poster design has continued throughout his career and led him to create several Olympic Games images. In commemoration of the XXVI Olympic Games held in Atlanta, the French designer, Pierre Cardin, presented Sportif, his new line of clothes for active men and women. That same year in 2006, Cardin mounted a special exhibition, Les Dieux de Olympe, to showcase Daniel You’s Olympic-inspired paintings. Cardin’s perceptions of the power of symbolic tales was honed when he created costume designs for the great French filmmaker, Jean Cocteau, for the influential 1946 film, Beauty and the Beast, based on themes from Greek mythology. Cardin and You draw on Cocteau’s visions to inspire theirs. Cardin has continued to promote Daniel You’s paintings and to work with You as a designer of furniture and other items in Cardin’s luxury lines. You’s artistic pursuits keep him travelling the globe seeking inspiration and creating extraordinary images for the world to enjoy. Throughout all his ventures, You’s passion for the spirit and images of mythic gods has remained at the center of his visionary work.

“I choose my classic themes from the symbolic characters of mythology, especially Greek. Prometheus, Icarus, the Minotaur — the images and stories of all the gods inspire me.” ~ Daniel You