“A SURREALIST ON OLYMPUS” – 2001 SPORT ARTIST OF THE YEAR 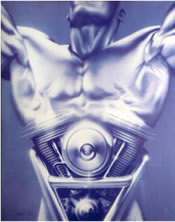 You describes the major stylistic influence on his work as Surrealism, mainly referencing the works of the Belgian artist, Rene Magritte and the Spanish artist, Salvador Dali. His content is inspired by the tales of the Greek gods. You also refers to the impact on his work of the Classical painters, especially Eugene Delacroix. He cites the work of contemporary painter, Francis Bacon, as very influential, as well as the sculpture of Richard Mac Donald. The elegant robot from Friz Lang’s iconic 1927 film, Metropolis, is also one of the artist’s stylistic muses. These historic influences merge to inspire You’s unique contemporary vision of classically beautiful heroes with a 21st century technological twist. In ancient mythology, people sometimes merged with animals to acquire more power. You’s contemporary people are shown merged with machines for their energy sources. Many early Surrealists used hybrid human-object images to convey feelings from visions and dreams.

Artists in the Expressionist Movement of the late 19th century painted bucolic folklore themes fused with free fantasy images. The Surrealists of the 20th century took this process as inspiration and painted images of newly invented machines that were transforming their cultures fused with their individual free associations. Man no longer mingled with nature. Man mixed with machines. Daniel You’s images follow in this tradition while modernizing the symbols of transformation into fusions of flesh with chrome, of muscle with technology. The challenge to classical beauty by modern technology is played out in these images. They also pose contemporary versions of the eternal question of the nature of reality with its distortion by personal viewpoint. You cites the works of the painter, Francis Bacon, as influential on his art. Elements of the Expressionist Movement are evident in Bacon’s paintings and in You’s. The Expressionist’s attraction to violence, yearning for extremes in sensation, exaggeration of physical qualities, and unrealistic use of color to transmit emotion all figure in Bacon and You’s works. Working in the mid-20th century, Bacon added an obsession with urban scenes and photographic images to this list. You’s paintings emit a sense of being photographs also, though photographs of inhabitants of a time when photography did not exist, perhaps photographs of their spirits returned.

You also credits the art from Russian political posters from the 1930s and 1940s as influencing his paintings. You’s paintings share many powerful attributes with the public political art of these decades: a vision of a future world in which machines come to the aid of mankind, a monumental presentation of the human body, a spare content and minimal palette, and a mood of brooding quest for ultimate physical experience.

Though from an earlier century, Eugene Delacroix’s paintings contain elements that are useful in achieving the goals of 21st century Surrealists. Delacroix was remarkable for his romantic passion, his interest in the dialectic between thought and feeling, and his unconventional use of color. The dialogue between intellect and emotion is at the heart of much artistic dispute. The evolution of social attitudes on the topic is recorded by the stream of great art down through the centuries. Daniel You’s paintings constitute a kind of 21st century archetypal saga of the interplay of thought and action, of dream and reality, structure and time, human and divine.

You’s portraits are of gods, and gods don’t fade or lose their figures and faculties. Gods, like the super characters captured in You’s paintings, live forever at the height of their intense energies and youthful physiques. Daniel You’s images remind us that in our humanity, in our experience of physical strength and beauty, we too can have moments of godlike sensations when we feel omnipotent and powerful. For human athletes, these fleeting moments become a kind of perfection. We can hold them in our memories and relive them at will. We can look to them like photos in a journal in the same way that we look at You’s paintings for inspiration.

Our triumphal moments also can live in other people’s memories where they achieve a kind of immortality. This is the realm where sports and art merge most powerfully. Great art can inspire us to strive for excellence and then memorialize our triumphs. Art is a record of human striving for perfection. Images from the heights of Olympus have lifted Daniel You’s career to the heights of the art world. His remarkable paintings of mortals uniting with mythic heroes inspire us as imperfect humans to strive for our perfect dreams.