“No more football for you, young man. Those three… art critics… said that you are the most expressive painter of sports since George Bellows. You’re an artist.”
Sonny Werblin, “ ~ Pads to Palette” 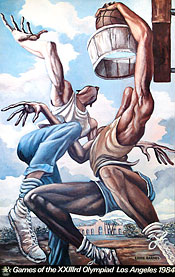 In 1966, Sonny Werblin, owner of the New York Jets, set up Barnes’ first solo exhibition, “From Pads to Palette,” at the Grand Central Art Galleries in New York City. The debut was a sellout. Barnes’ fame grew exponentially. The distinguished director of the Grand Central Art Galleries, Erwin S. Barrie, explained what good fortune Barnes had in acquiring Werblin as his patron. “That’s the way it should be. Once a man rises to a certain state of wealth it’s expected of him to make a contribution to the culture of his country. You could turn out to be his best.” (“Pads to Palette”)

Barne’s solo exhibition, “The Sports Art of Ernie Barnes,” in 1968 introduced his art to the McKenzie Gallery in Los Angeles. His solo work would return to that gallery the following year in an event hosted by actor Charlton Heston, and another event in the year after that hosted by journalist, novelist, and screenwriter Adela Rogers St. John. His exhibitions then brought his work to Elizabeth City State University in North Carolina. In 1972 Barnes began a national tour titled “The Beauty of the Ghetto,” which lasted until 1990, taking his artwork from the Heritage Gallery and the California Science and Industry Museum in Los Angeles to his alma mater’s North Carolina Central University Art Museum, to the Museum of African Art in Washington D.C., to the North Carolina Museum of Art in Raleigh among other prominent venues. From 1974 to 1979 his artwork was featured on the CBS primetime TV series, “Good Times,” and in 1976 his painting “Sugar Shack” caught the eye of Marvin Gaye, who used the painting for the cover art on his album, “I Want You.” Barnes’ recognition as a significant sport artist led to his being named the Official Sports Artist of the 1984 XXIII Olympiad in Los Angeles, and acquired the attention of the United States Sports Academy’s founder, President, and CEO Dr. Thomas P. Rosandich, who named Ernie Barnes the academy’s first Sport Artist of the Year.

The Games of the 1984 XXIII Olympiad in Los Angeles, California saw Carl Lewis match Jesse Owens’ four gold medals in the 100m, 200m, 4x100m relay, and long jump events. The 400m hurdles were the setting for the first woman from an Islamic nation, Nawal El Moutawakel of Morocco, to win a gold medal. Gabrielle Andersen-Schiess of Switzerland epitomized perseverance when she fell across the finish line in a dramatic ending to the women’s marathon. Amidst these historical athletic accomplishments, the XXIII Olympiad was also the inspiration for five original paintings by appointed Official Sports Artist for the Games of the XXIII Olympiad Ernie Barnes, the 1984 Sport Artist of the Year. 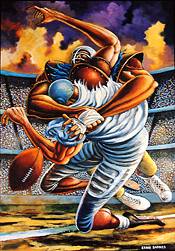 In 1984 the American Sport Art Museum and Archives (ASAMA) was founded on the campus of the then 12-year old academic institution, the United States Sports Academy. On 16 March 1985 at the Mobile Hilton in Mobile, Alabama, ASAMA in conjunction with the United States Sports Academy awarded its first ever Sport Artist of the Year Award to Ernie Barnes. Selecting Barnes as the inaugural recipient of the award was practically a given. Peter V. Ueberroth of the Los Angeles Olympic Organizing Committee (LAOOC) had called Barnes’ Olympic posters portraits of “the ethnic diversity of Los Angeles, the power and emotion of sports competition, the singleness of purpose, and the hopes that go into the making of athletes.” It was these attributes of Barnes’ work that made him the ideal candidate for the first Sport Artist of the Year Award. Since its inception, ASAMA has “recognized the importance of the cultural connectivity of athletic competition and artistic expression,” and thus quickly identified the significance of Barnes’ sports art. In correspondence years later, Barnes would recognize the artistic vision of Academy President and CEO Dr. Thomas P. Rosandich. Barnes wrote that it was Dr. Thomas P. Rosandich’s “goal of establishing art at the highest aesthetic level in the Gulf Coast” that made the museum and the award possible.

Created to be given “to an individual who captures the spirit and life of sport so that future generations can relive the drama of today’s competition,” the 1984 Sport Artist of the Year Award was a meaningful achievement for Barnes as a painter. But the implications of the award reached beyond the surface of the canvas. In addition to being a master painter, Barnes was also a grassroots philosopher. His humanist views shine through the colors of his artwork. His compassion for others was something he wanted to convey through his art. “The impact of sports resides in our ability as fans to identify with the athlete who is striving against his limitations. The lesson lies in being able to apply to our lives the same dedication,” Barnes said. “Sports are much more than just sporting events. They can be applied to our lives as a spiritual celebration, and this is what I hope to convey in my paintings.” Barnes’ ability to capture emotional truths in his paintings made him even more of the exemplary candidate, and the Sport Artist of the Year Award became more than recognition of the aesthetics of his work. The award was also a tangible acknowledgment of his message.

For the next 20 years after being named Sport Artist of the Year, Ernie Barnes continued a successful and prolific career in art, making him one of the few American artists to make a substantial living by painting. He was commissioned to produce a painting for the 1987 World Champion Los Angeles Lakers basketball team, actor Sylvester Stallone, Seton Hall University, St. Benedict’s Prep School in Newark, New Jersey, the Carolina Panthers football team founders Jerry and Rosalind Richardson, the National Basketball association, actor Will Smith, boxer Oscar De La Hoya, and musician Kanye West. The major commissions were in addition to several exhibitions and donated paintings. Ernie Barnes’ reputation continued to swell. His art has been called, “poetic,” “commanding,” a “reflector of American society,” at the “forefront of contemporary visual art,” and a “must have” for athletic art collectors. Art critic Frank Getlein said of Barnes’ art, “All these motions, all these bodies, all these colors and shapes, become, for a moment, ourselves. Art cannot give us more.”

In 2004, as Barnes’ reputation continued to grow, President and CEO of the United States Sports Academy Dr. Thomas P. Rosandich looked back on the 20 years of Sport Artists of the Year and recognized that “no other living American artist has done more to illuminate the world of the athlete and the drama of sports competition as this former athlete and world-renowned painter.” The Academy’s board named Barnes “America’s Best Painter of Sports.” Barnes’ painting “Olympic Finish” was considered for the International Olympic Committee’s art competition, and was later donated to ASAMA. In addition, Barnes was given the honor of the “Order of the Eagle Exemplar” and named 2004 Co-Sport Artist of the Year. Dr. Thomas P. Rosandich said, “Both the Museum and the Academy believe this recognition of Ernie Barnes’ extraordinary contributions to elevating sports imagery to the level of fine art is long overdue.” Presenting the award at an event honoring Barnes in Los Angeles, California, Dr. Thomas P. Rosandich added, “Through his masterly command of line and composition, his characteristic depiction of human anatomy using elongation and distortion, and his origination of the analyzed moment to portray athletes in delayed motion, Ernie Barnes has given sports fans everywhere a window into the agony and ecstasy, as well as the hopes and dreams, of the quest for physical greatness.”

Ernie Barnes passed away on 27 April 2009. Barnes lives on in the memories of those who knew him and those who continue to be moved by his story and his art. The “deepest level of his being,” the artist, will forever reside in many private collections around the world.