“Space is perceived in the imagination…light is incandescent, fitful and unreal … figures are elongated, energized and dematerialized. All are illuminated and quickened by God’s Grace.”

Anyone who has had the pleasure and privilege of viewing Ernie Barnes’ works knows that this could be a fitting description of the style and sources of the power of his paintings. Instead, it is a comment by art critic David Davies on the masterpieces of the Greek artist El Greco who painted four centuries before Barnes was born. Barnes’ and El Greco’s works share both surface style and deep spiritual inspiration. Barnes described the transfer of energy from physical sport to intellectual art in his autobiography.

“I learned to balance my aggressive instincts within creatively by absorbing them into my expressions of movement through the contortions of the body. My mind was intensely active.” ~ “From Pads to Palette” 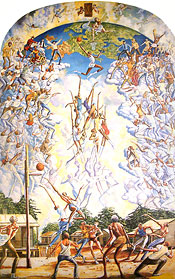 Barnes wanted to make a unique statement about 20th century American life. He was not concerned about appearing in sync with his contemporaries. Barnes took a technique from tumultuous Spanish history and molded it to communicate particularly American social struggles. His Neo-Mannerist style of painting suits his timeless spiritual themes and places the works in their proper historic lineage. Barnes says about his goals: “For me, becoming an artist was not an external compulsion but obedience to an inner need to become spiritually intelligent, to ask the ultimate questions about life, and to experience simultaneously the seamless connection between each of us.” 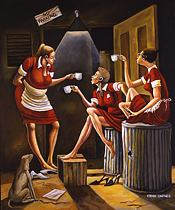 Barnes’ stylistic inspirations came from Europe’s El Greco and Tintoretto, as well as American originals like Charles White, Archibald Motley, and Thomas Hart Benton. His sport and art influences continually overlapped. During a game against the Chiefs in Kansas City, Barnes knocked down a player.“Getting up, I saw a little old man sketching behind their bench… He looked up from his sketch pad… the little old man was Thomas Hart Benton.” Barnes painted many different subjects, including many well known sports highlights. As El Greco’s work inspired Barnes, Barnes’ work ignites future artists. Though Barnes passed on in 2009, his spirit continues to energize all who view his work and urge us toward compassion, creativity, and striving for social betterment.

“When I do sports themes, I can approach them from many levels. The dedication, the discipline, the attitude you have to bring… I can project what it is like to be an athlete… It is my job and personal dedication to restore us to some of the wonders brought by the endurance of the human spirit.” ~ Ernie Barnes, “Pads to Palette”