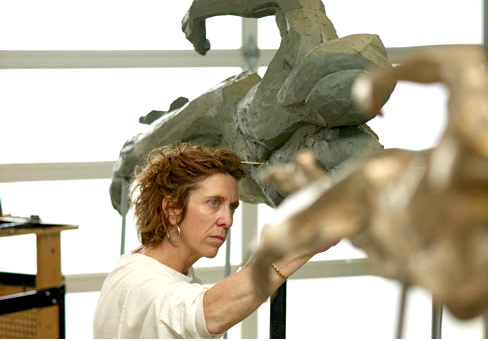 Ms. Gail Folwell, a resident of Boulder, Colo., uses her appreciation of sports and anatomy to sculpt various athletes. Throughout her art, she expresses the energy of the athletes and their sport with abstracted figurative forms frozen in mid-motion.

Whether a baseball pitcher captured immediately following the release of the ball or a swimmer in mid-stroke, Folwell’s interpretation of the competitive athlete is simultaneously contemplative and exciting.

Folwell has been exhibited with the National Sculpture Society and The National Academy of Design.

In addition to these achievements, she has completed sculptural commissions for the National Hockey League, Vail Resorts, Bowling Green State University, the City of Frisco, Texas, and many private collectors. She was also honored by Southwest Art as one of 25 Leading American Sculptors in July 2002.

Her piece entitled, Pas De Deux, depicting an exchange between two hockey players, was honored by the National Sculpture Society in 2002 and during the National Academy of Design’s 175th Annual Show in 2000. This piece is now housed in the American Sport Art Museum in Daphne, Ala.

In 2010, Folwell was honored by the National Art Museum of Sport for her bronze sculpture entitled, The Pitch, which features a baseball player in mid pitch.

Folwell owned and operated a design firm, while painting, illustrating, sculpting and teaching from 1986 until 1995 before deciding to pursue sculpting full time.

She received her bachelors of fine arts in 1983 from the University of Denver, where she has served as a faculty member. Folwell also served numerous years as the Head of the Graphic Design Department at the Metropolitan State College of Denver.