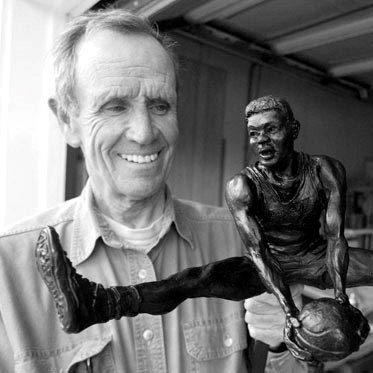 Harry Weber was born in St. Louis, Missouri in 1942 and educated at Princeton University where he studied art history. Following his education, Weber served six years in the United States Navy. This included a year on river patrol boats in Vietnam where he compiled a compelling series of drawings chronicling his experiences there.

As a sculptor, Weber has produced a body of work of over 100 large and more than 200 smaller pieces. His work embodies human emotion and power with a spontaneity developed from a lifelong habit of sketching from life. He creates sculptures which capture an instant, never static or posed, with a distinct style making maximum use of the natural fluidity of the bronze medium.

Weber sculptures have won major awards at national juried competitions. They are in private collections in the United States and abroad, and have appeared on the covers of several national magazines. His sculptures of famous sports figures are prominent features at nine different professional and college stadiums. He has installed monumental work in eight different states and the Bahamas.

Two of his sculptural groups have been designated National Lewis and Clark sites by the Federal Parks Department. This includes a twice life sized monument of Lewis and Clark on the St. Louis Riverfront commemorating the final celebration of the bicentennial of the expedition.