“It was an era of pushing holes through rocks and sometimes lacing string across the space to form a crazy-looking musical instrument. I found all these shapes fascinating and they opened my eyes to the sculptural aspect of nature.” ~ John Robinson, Hyperseeing, 2007 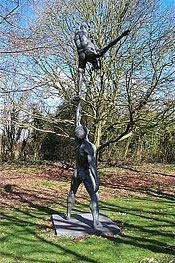 Robinson found inspiration in the works of Naum Gabo, Jean Arp, Henry Moore, and Barbara Hepworth. These artists explored form and space—form and the effects of absence of form in holes—without close attention to figurative representation in rejection of traditional concepts of sculpted art. The artists, including Robinson, were involved in making the transition from Abstract Expressionism to the widely encompassing movement called Modernism. After World War II, the capitol of contemporary art was moving from Paris to New York, and London with its iconoclastic St. Ives group was an important stop along the way.

Robinson experienced his “greatest mental Awakening” after reading the philosophy of psychologist Carl Jung who prized an individual’s dreams and the symbols from the collective unconscious as the most valuable sources of inspiration. In a conversation with Ronnie Brown published in From the Beginning Onward (2005), Robinson quotes Jung: “The Artist is, as it were, not so free in his creative work as he may think he is. If his work is performed in a more or less unconscious way, it is controlled by laws of nature that on the deepest level, correspond to laws of his psyche, and vice versa.” In line with this philosophy, Robinson looked to nature while simultaneously looking inward for inspiration. 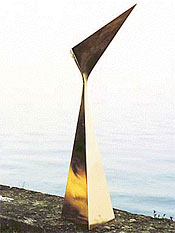 Robinson clung to natural symbols as a way to explore the world around him and, therefore, turned to Symbolism as a kind of religious expression, one which attempted to understand the meaning in the earth, animals, man and woman, birth, religion, civilization, and death through form.

“Thousands of years ago our ancestors did the same thing, and the artists amongst them invented Symbolism, as a way of providing answers to the questions they were beginning to ask about the “purpose of their existence.” We are still asking the same questions, and still need symbols to help us with our understanding of the Universe in which we live.” ~ John Robinson, in “A Tribute to John Robinson,” Hyperseeing, 2007

The Universe Series of Symbolic Sculpture is Robinson’s largest series of work. He began working on the series in the early 1970s, building it to over 100 pieces made of bronze, wood, stainless steel, marble, and tapestries. The Universe Series explores mathematical principles with science and artistic aesthetic.

One needs not to look beyond Robinson’s sport art to see the spiritual and mathematical connection he had to his sculptures. His sport art includes “Pole Vaulter,” “Soccer Players,” and “Acrobats,” a five meter high representational athletic sculpture, all displayed outside the Australian Institute of Sport in Canberra. Robinson’s “Gymnast,” a life-size figure, is on display at the International Olympic Museum in Lausanne, Switzerland.

For the United States Sports Academy’s Awards of Sport Series, Robinson designed the Eagle Award, the Jim Thorpe All-Around, the Dwight D. Eisenhower Fitness Award, the Amos Alonzo Stagg Coaching Award, and the Jackie Robinson Humanitarian Award. “The Pathfinder,” or “The Hammer Thrower,” placed prominently in the atrium of the United States Sports Academy in Daphne, Ala., features a larger-than-life cast-bronze athlete in mid throw. The incredible size, permanence, and balance of “The Hammer Thrower” evoke a certain sense of spirituality—a profound natural tension, triumph, and poise also found in his symbolic art.

A longtime friend of the United States Sports Academy, John Robinson passed away on 6 April 2007 after a brief illness of advanced lung cancer with “no regrets, and in the midst of his family.” In “John Robinson, Sculptor” (2007), friend Ronnie Brown writes,

“But only John could give the elegance and rhythm of line and form to this sculpture he has given the subtitle ‘Passing on the Torch of Life.’ This John has surely done for us all. We shall surely miss his creative force, kindness and generosity of spirit.”