“Father of Contemporary Sport Art” – 2007 sport Artist of the Year

“I created LeRoy Neiman. Nobody else told me how to do it. Well, I’m a believer in the theory that the artist is as important as his work.” ~ LeRoy Neiman; www.leroyneiman.com

For this trendsetting American painter, art doesn’t merely imitate life. Neiman’s art and his life are inseparable aspects of one dynamic experience. Artistic innovator, productive painter, fine draftsman, media showman, philanthropist, and bon vivant, LeRoy Neiman brings his unique combination of talent, personality, and high energy to every painting and public event in which he participates, fusing the concepts of art and artist in productive and exciting ways. 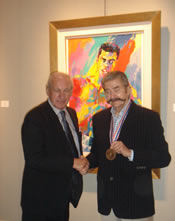 Neiman’s groundbreaking work has garnered countless international accolades and awards. However, to the general public, he is most widely known as the remarkable, entertaining artist who invented the genre of Contemporary Sport Art. The key turning points in this process were his appearances on live television painting athletes at the very moments that they were competing in the Olympics. Neiman produced artwork on screen, working from a blank canvas to a finished action painting, sporting his signature long handlebar mustache, often dressed in a jaunty hat, and smoking a cigar. No one had attempted to make fine art an onsite, real-time part of major media sports before. These displays brought art back to the forefront of sports events where the Olympics’ founder, Pierre de Coubertin, had insisted it belonged. 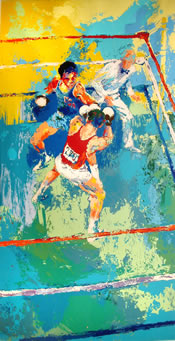 The demonstrations also created an indelible memory of Neiman for anyone who saw the colorful artist making his dynamic portraits of athletes. Worldwide, July 1972, millions of television viewers watched Neiman sketch Bobby Fischer competing against Boris Spassky at the world champion chess tournament in Iceland. In August and September 1972, ABC-TV broadcast Neiman drawing scenes live at the Summer Olympic Games in Munich, Germany. He worked in a variety of fast media, including watercolor, chalk, pencil, charcoal, and felt-tip pens. Next, Neiman demonstrated his action painting for television during the Olympic Games in Montreal in 1976, at Lake Placid 1980, and in Sarajevo and Los Angeles 1984. Going high tech during the 1978 and1979 Super Bowls’ CNS-TV broadcasts, Neiman employed a computerized electronic pen to draw the sports events. He was honored as the official artist for the 1979 and 1980 Sports Spectaculars on CBS-TV. At the 1980 Democratic National Convention, Neiman was the official artist to record the historic event. In 1986, Neiman was chosen as the official artist for the Moscow Goodwill Games on Turner Broadcasting Network.

Neiman’s artistic skills, business savvy, and engaging personality bring him exceptional access to the players and usually tickets to the best seats in the house. No reclusive, impractical artist, Neiman learned from his association with sophisticated art colleagues during the 1950s, ‘60s, and ‘70s how to create a memorable media personality and how to effectively combine fine art and first rate business.

“Business art is the step that comes after Art… I wanted to be an Art Businessman or a Business Artist.” ~ Andy Warhol; Artist to Artist, Jackson Creek Press, p. 38 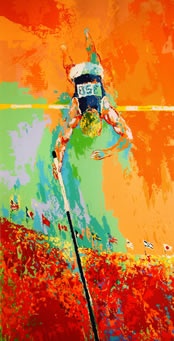 Many of Neiman’s business skills as well as his taste for the high life came from his association with the icon of 1950s fast living, Hugh Hefner. Hefner and Neiman met when both were just beginning to climb their professional ladders and recognized their kindred spirits and mutually beneficial talents. Hefner hired Neiman, working freelance at a Chicago department store at the time, to draw illustrations for his fledgling Playboy magazine. Neiman’s first story illustrations earned Playboy Magazine a Chicago Art Directors award and propelled Neiman into a glitzy career as one of Playboy’s main artists. Neiman also wrote his own ongoing Playboy feature called “Man at His Leisure” for which Neiman produced many illustrations of sporting events and social galas at some of the world’s most famous vacation hotspots.

As a youth, raised in a hard scrabble, blue-collar St. Paul, Minnesota neighborhood, Neiman had used his artistic talents to earn extra money painting signs for shopkeepers and posters for school events. Later during his stint in the U.S. Army, Neiman painted murals on dining hall walls and stage sets for Red Cross shows. Military life with its strictly regulated power strata brought home to Neiman how much more fun life at the top of the heap could be than at the lower registers. However, Neiman never lost his interest in all types of people from all walks, and their varied lifestyles would become the subjects of many of his paintings. More important to Neiman than the material advantages of the upper classes was the capacity for adventure and for living life at one’s fullest that Neiman observed and learned to emulate.

“Playboy made the good life a reality for me and made it the subject matter of my paintings– not affluence and luxury, as such, but joie de vivre itself.” ~ LeRoy Neiman; VIP Magazine, July 1962

In 1961, perfecting his joie de vivre, Neiman rented a studio in Paris and produced studies of the Deauville racing and social season as well as famous French restaurants. He won a gold medal at the Paris Salon d’Art Moderne. He also spent exciting time in Italy painting gondoliers in Venice and the filmmaker, Federico Fellini, at work. He developed a taste for the glamour and grit of gambling casinos, horse racing, nightclubs as well as the celebrities, sports stars, and ordinary working people who frequented them. This heady mix of people would become fans and patrons of Neiman’s inside portraits of their worlds. While enjoying all his adventures, Neiman also worked hard at his art and developed a unique style of painting that would carve him a special niche in the history of art. Throughout it all, he cultivated his flamboyant public persona that had become both a source of creative energy and an inseparable part of his art.

“I like being outrageous. I don’t actually do anything except be conspicuous. It keeps me revved up… My performance is part of my success.” ~ LeRoy Neiman; www.leroyneiman.com