“He found an extremely dynamic way of making the abstract background and realistic foreground merge and separate simultaneously by alternately fusing and separating the two spaces. In this remarkable synthesis, he was able to make the action within the painting as intense as it actually is in our direct experience.” ~ F. Lanier Graham; www.leroyneiman.com

In the long history of Sport Art, from ancient Greek statues of ideal athletes to the serene paintings of English thoroughbreds by George Stubbs, the stylistic timeline is distinctly divided between Before Neiman and After Neiman. Sports in European artworks most often were portrayed with athletes frozen mid-motion and in Classical images of aristocratic pursuits such as fox hunting, rowing, elegant horse racing, badminton, and fencing. Portrayals of sports scenes were relatively rare in 19th century art and reflected the images of the ancient Greek ideal of perfect Olympic athletes.

The 20th century saw a change in public aesthetics. The brash American Revolution in the 1700s had resulted in shifting the social and artistic spotlights in the 1800s from aristocrats onto average citizens and the nitty-gritty sports they enjoyed. By the early 1900s, the American upstarts had overturned their European ancestral influences with more democratic depictions of athletes and sports as well as the leisure pursuits of the newly affluent middle class. By the 1950s, overturning tradition and seeking change in every aspect of life, including art, music, and social mores, became a good rather than a threatening theme, and faster was always better.

This obsession with transformation and speed surfaced in the art styles of major, influential artists. Here was art that communicated the pains and pleasures of chaotic contemporary life, including its high-energy sports. The general public reacted to art’s frenetic mood with pleased recognition. However, until Neiman’s stylistic innovations of the 1960s, no art style thoroughly portrayed the speed, intensity, and iconoclastic spirit of contemporary sports. Neiman’s style not only made sports art more popular, his focus on dynamism made it more genuinely contemporary.

“Here lies the prime objective of my work – this phenomenon of change. The spectator looking at a painting of mine must deal with this condition of change. Areas are broken up at close range and fit together only at a distance… These plastic qualities of my painting coincide with the realities of contemporary society and its rapidly moving, shifting and ever-changing panorama.” ~ LeRoy Neiman; www.leroyneiman.com 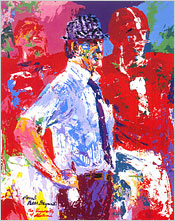 The most obvious dynamic layer of Neiman’s technique captures the viewer’s attention with the familiarity of its contemporary energetic mood. The next more subtle layers lead the viewer beyond the surface into the deeper elements swept along in this whirlwind of motion.

“Ready recognition of key elements (in my art) is difficult because of a certain lack of clearness… I seek to make the task of the spectator increasingly difficult… By venturing into and penetrating the painting, the spectator discovers for himself new substances and has a prolonged contact… This gives the spectator more room for conjecture, and his contribution to the visual image, upon contemplation, adds to its provocative possibilities.” ~ LeRoy Neiman; www.leroyneiman.com

“Today’s man accepts many casual observations and oft-times the real truths escape him if he doesn’t take the time to look beneath the surface.” ~ LeRoy Neiman; www.leroyneiman.com

Much of the history of art revolves around one long debate about the nature of reality and questions of our ability to perceive it clearly. What is real and what is illusion? What methods can we employ to examine these questions more thoroughly? Each change in art style in different eras is an attempt to approach these basic life questions from a new angle. Are life’s important issues better examined by the precision of Classical draftsmanship and Photo-Realism or by the emotional explorations of unconscious realms of Surrealism and Expressionism?

The revolutionary splatter art of Jackson Pollack in New York in the 1950s and 1960s was an attempt to strip away all nonessential elements of painting and get to the root of its vital energy. Taking the movement of the artist’s body as he or she spread paint on a surface as the starting point of artistic creation, Jackson made paintings in which the tracks of the artist’s body energy recorded by pure splashes of paint in no representational forms provided the sole content. Contemporary Action painters and Abstract Expressionists such as Franz Klien and Robert Motherwell were greatly influenced by centuries old theories of recording the artist’s energy in Chinese and Japanese calligraphy. Neiman found the techniques of the Action Painters very useful to his purposes and then took them into whole new realms by adding his own technical inventions. These stylistic breakthroughs have made Neiman’s paintings famous and significant to any collector interested in the history of contemporary art. Neiman’s style also happens to be perfectly suited to recording the motion and energy of high performance sports.

Neiman usually paints on Masonite or Upson board coated with a polymer ground and covered with large areas of commercial enamels. Next come glazes of oil paints, all in vivid colors. Then suggestions of the representational images are applied.

“Areas are broken up at close range and fit together only at a distance. As one advances on my painting, it becomes more abstract, more fluid, and as one moves away, it falls into focus and is realistic… At no two distances will the painting appear the same.” ~ LeRoy Neiman; www.leroyneiman.com

Neiman creates most of his commissioned paintings in his New York studio across the street from Central Park where he also shares an apartment with his wife, Janet Byrne, whom he married in 1957. Neiman is assembling a collection of his works for preservation at the Smithsonian Institution in Washington, D.C. He has been a member of the New York City Advisory Commission for Cultural Affairs since 1995. Neiman received an Award of Merit form the American Athletic Union in 1976, a Lifetime Achievement Award from the Muscular Dystrophy Association in 1986, and in 1995 he donated $6 million to create the LeRoy Neiman Center for Print Studies at Columbia University’s School of the Arts.

Neiman took the revolutionary techniques of Found Art and pushed them even further into new realms by performing the act of artistic creation live on the era’s most popular technology. Not simply an icon of contemporary culture was used as the center of his art but the whole event of artistic creation which became the ‘found object.’ This extraordinary man of action has made art more of a living part of all our lives, and his artworks will continue to energize and inspire many generations.