“Motion and Dynamism in Art” – 2002 Sport Artist of the Year

“After a certain high level of technical skill is achieved, science and art tend to coalesce in esthetics, plasticity, and form.” ~ Albert Einstein, Physicist

In contradiction to many popular stereotypes about the development of artistic genius from misery, this dynamic prodigy emerged from an exceptionally positive and secure early life. As down-to-earth as she is intellectual, Dr. Mina Papatheodorou-Valyraki is comfortable translating complex, aesthetic explorations in her paintings into the everyday personal realm. The artist describes the defining rhythms of her works:

“If I were to isolate little pieces from one of my works, we would see that they too are autonomous, because they represent what I am: energetic and hyperactive, restless… I believe that the (painting’s) ensuing intensity is due to this inner mood, and to the energy and mobility that characterize me. Besides, painting, and every other form of art, is a psychograph” (Dialogue about Art, p. 31). 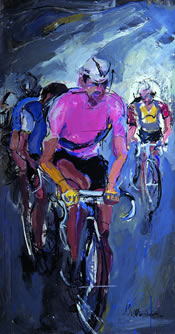 Born in Athens, Valyraki grew up supported in her dreams of pursuing art by loving parents who encouraged her self-reliance and confidence. At Athens University’s Superior School of Fine Arts, Valyraki studied under Yiannis Moralis and Lazaros Lameras, graduating with distinction in1980. In 1981, Valyraki moved to Florence to continue her studies on the History of Art with a scholarship from the Italian Ministry of Foreign Affairs.

The rich art culture of Italy and exposure to nearby cosmopolitan Monaco opened new thematic horizons, and she began painting ships and cars. In 1998, Lamborghini automobile manufacturer honored the depth of her perceptions about cars with a commission to create a commemorative work celebrating the company’s thirty-five years of operation. Valyraki was nominated as Lamborghini’s official artist and admiringly dubbed, “The High Priestess of Ferrari.” The official poster for the 58th Grand Prix of Monaco was Valyraki’s work titled, “Monaco 2000.” During this period from 1985 on, Valyraki’s deepened study of the human body found expression in new works portraying athletes and sports stars. In 2002, the United States Sports Academy named Valyraki ‘Sport Artist of the Year.’ Her work, “The Downhill Skier” became one of the official posters for that year’s Salt Lake City Winter Olympics. 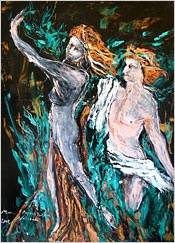 Showcased in her dynamic Abstract Expressionist works, Valyraki’s training and technical skills are exceptional, yet the viewer’s attention is never confined solely in the material plane. Artists search for truth through intuitive exploration, and scientists search through logical examination. The two approaches merge as the explorers come closer to their answers. Great artists refine their technical skills in order that they may more effectively express the spiritual underpinnings of their works. When contemplating Valyraki’s paintings of race car track scenes or urban traffic jams, our spirits soar as our attention is directed through the mundane into subtle realms and conceptual questions of the nature of reality and the illusions of speed and time.

As Leonard Shlain comments in his book, Art & Physics (HarperCollins, 2001),

“Revolutionary art and visionary physics are both investigating into the nature of reality… Art generally anticipates scientific revisions of reality… bringing forth symbols that have helped the rest of us grasp the meaning of the new concepts even they, the artists, may not have formulated intellectually.

“The great artists forge ahead in their intuitive quests driven not primarily by intellectual ambitions but by a profound trust in the urgency of their creative drive.

According to physicist, Albert Einstein, “the greatest scientists are always artists as well,” and the reverse often holds true. Artists are inevitably led methodically to dissect the many layers of the material plane in their search to understand the deepest center behind it. In spite of its impossibility, comprehending the source of all energy is the eternal mystery that holds scientists endlessly in its thrall and remains the ultimate goal of the examined life. We can only glimpse a part of the answer to the mystery, but even a brief glimpse is the key to intellectual and artistic inspiration. As Leonard Shlain notes, “Artists create a language of symbols for things which there are yet to be words.”

Valyraki describes her works’ symbolic language when she says,

“My works are what is retained by those who look at them and penetrate into them. They become one with them. Then the ‘communicative code’ really takes shape… The work of art is a semiotically communicative tool”

(Dialogue about Art, p.37). Valyraki communicates from her unique energetic approach. Many artists’ paintings invite serene contemplation of their dream worlds. Valyraki’s bold paintings shake us awake, grab our full attention, buckle us in, and sweep our emotions powerfully along a speedway of personal exploration.

Valyraki’s works can be enthusiastically enjoyed on a decorative level, yet their deeper moods exert a more powerful magnet. In Valyraki’s artistic visions, cars, ships, and athletes are all potential means of transportation to deeper realms. She wants to get to the heart of the matter and seeks the fastest means available. Although her Lamborghini and Formula 1 race car images are beautiful to behold, these are not paintings in which a car is just a car. The ships can become submarines to the unconscious. The taxis are very contemporary chariots to the higher chakras. In Valyraki’s hands, these become transportation pods to more ephemeral realms as they race toward spiritual discovery and the source of life’s core energy.

In Valyraki’s signature style, forms are minimally suggested by strokes of paint intently placed to characterize the spirit of each person or object. The whole of the work is structured by powerful paint gestures aimed at eliciting the primordial energy field that drags everything along with it in the relentless rush toward its source. As art critic, Dora Eliopolou-Rogan, Ph. D., Commandeur des Arts et Lettres en France, says, Valyraki paints, “on an ingenious borderline between representation and abstraction… Spirit and material are… two different sides of this one, sole Truth… that is identified with the supreme Energy… expressed… through the explosive combinations of colour and trace, in the ‘living’ creations of the artist” (Dialogue about Art, p.59). Coherent with Abstract Expressionist theory, many of Valyraki’s comments about the underlying sources of structure in her works could easily be quotes from a physicist describing scientific investigations of the role of light in forming matter. As Leonard Shlain notes, “Quantum mechanics arose out of two unresolved questions about the nature of light… Light is the link connecting space, time, energy, and matter” (Art & Physics, p.26). Valyraki explains: “Light is the alpha and omega in my work. I seek it through the… brightness and lucidity of each colour… I believe that there are two components which may be said to characterize my work: a definite draft that ensures the structure of the composition, and the intensity of the colour, which gesturally follows the flow of this composition” (Dialogue about Art, pp. 29 & 31).

The luminescent blue of the Mediterranean light is a signature element in many of Valyraki’s paintings and a reminder of the artist’s Greek roots from which she draws creative energy. Although a frequent traveler and an enthusiastic citizen of the world, Valyraki makes her home in Athens with her husband, Sifis Valyrakis and their two sons, Yiannis and Alexandros. Her exciting works have garnered much public acclaim and been selected for many exhibitions, museums, and private collections around the world.

“Success is something very important for an artist… not only for him to make a living, but mainly so that he can create.”

Dr. Valyraki comments “Picasso was on to something. That is why he reached the age of ninety-four and never stopped creating.”

In light of her extraordinary talent, her remarkable energy and passion for her art, it’s a solid bet that Valyraki will beat Picasso’s record for continued high performance, creativity, and groundbreaking exploration into the symbolic language of speed, energy, and light. We shall all be the richer for it.