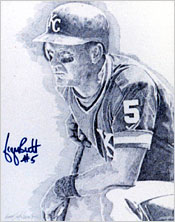 Illustrations by Murray Tinkelman have won gold medals from Society of Illustrators, Society of Publications Designers, and The New York Art Directors Club. His works stand in the permanent collections of many museums, including International Photography Hall of Fame & Museum, New Britain Museum of American Art, Delaware Art Museum, Brooklyn Museum, and American Sport Art Museum and Archives. Top drawer publications such as The New York Times, Atlantic Monthly, and The Washington Post all have published his illustrations. The National Park Service commissioned Tinkelman to produce drawings and paintings of National Parks and Monuments. The U.S. Air Force chose him as an artist-reporter on several missions. The National Baseball Hall of Fame in Cooperstown honored him with a one-man exhibit of Tinkelman’s baseball art. 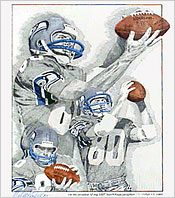 All these heavy duty accolades are heaped on a down-to-earth artist who attributes his major inspirations to the pop culture icons of his 1940s and ‘50s Brooklyn boyhood. Murray spent much of his childhood playing with neighborhood kids, going to movies, watching baseball, and ogling at the curvy, chromed 1950s car designs. His art-oriented high school, School of Industrial Art, offered thorough training in the basics of drawing, photography and filmmaking. Later he attended the prestigious Cooper Union Art School, but quit before graduating because he thought their attitude toward illustrators condescending. Sports supplied him with dynamic heroes, but cowboys and science fiction creatures were also key influences on his later art.

“The Saturday afternoon matinees of the 1940s were the inspiration for my love affair with cowboys and Indians… Although there were no cows in Brooklyn and precious few horses… my Dad was an avid reader of pulp westerns. I read and reread his discarded… paperback books. I will never forget the thrill I experienced when I first read The Virginians immortal line, ‘When you call me that, smile!’” (tinkelmanstudio.com).

Throughout his career, Tinkelman continued to pursue his art with youthful enthusiasm, humor, and hard work. These qualities would serve him well during his struggles to establish himself in the competitive advertising business of 1950s New York. As a fledgling commercial artist, he tenaciously held his ground against the romanticism and glossy, idealized pictures of status quo 1950s and ‘60’s advertising. On assignments, he drew it his way. He retained the intricate black and white pen strokes, and the unique, gritty, graphic edge for which his work would become famous. 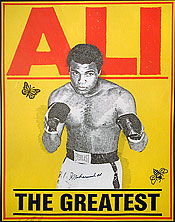 Tinkelman’s first big break came when he met one of his key mentors, Chuck Cooper, who had established the influential Charles E. Cooper Studios at the corner of 57th and Lexington, New York. Known as the preeminent illustration studio from the late 1930s through the early 1970s, the firm’s upscale glamour intimidated Tinkelman on his interview there. Tinkelman was desperate to escape the humdrum limits of his greeting card job and rise to challenging, contemporary work. He describes his introduction to this cosmopolitan business world that he would ultimately help change:

“There’s Chuck. Short, maybe 5’6”, wearing a white shirt, open at the collar, and the tie was pulled down a bit. His sleeves were rolled up, and his office was a symphony of black glass, teak, and mahogany, with books lining the shelves. Beautiful original art work on the walls… He looked at my stuff. Never said a word… Turned his back to me, put his hands in his pockets, and said, ‘What do you want?’ … I blurted out, ‘I want to make a living making art work. I want to be able to look at myself in the mirror in the morning.” Without much fanfare, he said, ‘All right. Come in Monday.’”
Illustration Magazine, 2006; pp. 52-53 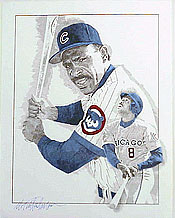 On starting his new job, Tinkelman found that he was the youngest and most controversial artist among a large pack of famous, established professionals. He took the old guard’s ribbing with characteristic good humor. It never dampened his rebellious assault against expected, smoother drawing styles.

“Someone once described me as ‘the savage on the 11th floor.’ Every once in a while someone would throw in a piece of raw meat and slam the door shut… It was my role as a representative of the next generation… I was the experiment with a kind of loose, expressionistic painting. My stuff was truly off the-wall… (with )a little bit of bite to it.” ~ Illustration Magazine, 2006; p.56

Tinkelman found inspiration for both his artwork and his soon-to-be-famous presentation style from a teacher at Cooper Union. Tinkelman had a Max Bechmann scholarship that allowed him to spend time at the Brooklyn Museum. There he met Reuben Tam who critiqued his art work and became his mentor in painting as well as his new interest in lecturing about art history. Several other artists from the Cooper Studio were so impressed with the rave reviews of Tam’s erudite, poetic style of teaching that they also joined the class.

At work at Cooper Studios, Tinkelman found another important ally. Staff artists depended on jobs brought to them by in-house sales representatives who hawked the illustrators’ work to outside companies. Tinkelman’s favorite rep at the Cooper Studio was Bill Erlacher, who secured the most jobs for him. The rest of the reps were very old school in their tastes and did not send him much work. When Erlacher left the Cooper Studio to join a new group, Artist Associates, Tinkelman changed firms with him. His move was part of a larger, industry-wide downsizing of advertising businesses from huge, complete service companies to leaner, niche firms made up of young designers. The move was good for business and hard on his deep friendship with Cooper.

“I was literally invented by Chuck (Cooper) on one hand, and Reuben Tam on the other. Totally different characters. I loved Chuck, and at no time, ever, did I forget how important he was to me.” ~ Illustration Magazine, 2006; p.56

Tinkelman was selected as Professor Emeritus from Syracuse University where he had taught Illustration in the undergraduate program and the Independent Study M.A. Program. He also became Director of University of Hartford’s Limited Residency M.F.A. program. Tinkelman’s wit, as in demand as his art, has gained him a gold card reputation as a guest lecturer and as a popular professor of art history. Commenting on a Tinkelman presentation at Dennos Museum Center of Northwestern Michigan College, the Curator of Education & Interpretation, Kathleen Buday said, “Murray’s dynamic presentations were entertaining and insightful, filled with anecdotes that enchanted all in attendance” (tinkelmanstudios.com).