If a national election were held in America for the title of “Sport Art’s Troubadour,” Opie Otterstad surely would be the winning candidate. A prolific painter of historic athletic events, Opie, as he signs his artworks, takes to the road for about three-quarters of his working year to visit patrons, models, and fellow artists. The trips help him keep up-to-date on their lives and give him the opportunity to swap business information and tall tales with the famous sports figures who have become his friends. An intense travel schedule is an essential part of Opie’s creative process because his paintings are not only about varied types of sports that he loves but also about the people inside those sports. He describes his process of creating art in terms of developing relationships. To Opie, paintings are stories, and the characters in them must be known well to be shown well.

“Contemplating paintings, everyone can create a story at the will of his imagination and with a single glance have his soul invaded by the most profound recollections.” ~ Paul Gaugin; www.artquotes.net 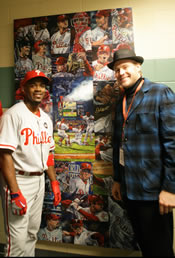 Born in Texas in 1970, Opie recalls that his first affirmation of artistic talent came at age three in response to a drawing he did during a church sermon. After the service, his preacher father commented that Opie’s drawing “looked just like the transfiguration.” He realized that he could communicate through his art and became motivated to pursue it. Ongoing encouragement came from his grandmother, a painter who allowed Opie to sit beside her easel as she worked. When other children were playing outside, he often stayed inside to watch and learn. Many years later well into an impressive professional career, Opie would present his grandmother with an artist’s palette inscribed with the words, “To my first inspiration.”

After graduating from St. Olaf College in Minnesota with a bachelor’s degree in Studio Art and also in Psychology, he went on to earn his master’s in Psychology. This fascination with psychology surfaces in his work through his dedication to learning about his subjects and including their personal stories in his paintings. A chance meeting with Dr. Fran Pirozzolo, a leading sports psychologist, led to her support of his creative work through referrals to athlete clients and urging him to select sport art as his career focus. This career would take him far from Texas into the exciting world of professional sports stars and celebrities to create portraits of individuals and teams alike at their most celebrated moments.

“On the road again, Goin’ places that I’ve never been, Seein’ things that I may never see again…” ~ Willie Nelson, Texas songwriter 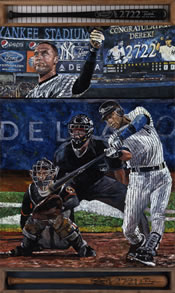 Opie takes considerable time to get to know his patrons, and this process can trigger the need for extended cross country road trips to visit his subjects where they live. He sees the development of relationships between artists and subjects as characteristic of a past era. He enjoys the exploration of America that is part of his research and the mutual bonds that develop over the years.

“Friendship is unnecessary, like philosophy, like art… It has no survival value; rather it is one of those things which give value to survival.” ~ C.S. Lewis; www.thinkexist.com

It was during one of his cross country trips that a legendary ball player knighted him into the inner world of professional sports buddies by giving him a new nickname. Opie was visiting with some of his baseball clients in New York, including talking with Reggie Jackson, the celebrated Hall of Fame right fielder who now is a special advisor to the New York Yankees. Years ago, Jackson had been given the sports moniker, “Mr. October,” for his clutch hitting in the post season. Jackson told Opie he needed a nickname. He asked if Opie knew anyone else whose initials were two O’s. Opie said he didn’t. Jackson proclaimed, “Then you’re ‘Double Aught.’” 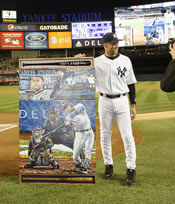 Opie has found a large and profitable professional niche with his work about baseball. For his creative innovations and significant contributions to the world of sport art, the United States Sports Academy named Opie the 2006 Sport Artist of the Year. Opie stops by annually to visit at the Academy’s Alabama campus on his way to or from visiting his clients in the “Grapefruit Leagues” in Florida as well as other East Coast leagues.

All these exciting travels don’t slow down Opie’s production rate. His exceptional work ethic has resulted in his creating more than 800 paintings since 1993. Married with one child, Opie lives and has a studio in Austin, Texas. With characteristic persistence and intense energy, he manages family life and his remarkable level of artistic creativity while still hitting the trail that calls to him to visit his stimulating friends for much of the year.

“What is the feeling when you’re driving away from people, and they recede on the plain till you see their specks dispersing? It’s the too huge world vaulting us, and it’s good-bye. But we lean forward to the next crazy venture beneath the skies.” ~ Jack Kerouac, author of ‘On the Road;’ www.thinkexist.com