“My personal mission is to widen my scope so that the art that I don’t understand becomes part of my vision. I think I got this as a child from my mother who took me along on her frequent visits to museums. She was an Iowa farm girl who believed devoutly that she could increase her cultural understanding by viewing great art.” ~ Opie Otterstad

During his travels when Otterstad arrives in a new city, he heads straight for the art galleries and museums. He likes to learn about new artists and absorb valuable knowledge from the old masters. According to a popular aphorism about art imitation, “Minor artists borrow ideas. Great artists steal.” Otterstad has no interest in copying complete styles of other painters, but he does find it enlightening to experiment with certain parts of other artists’ techniques. “I like borrowing little influences to try them out, like seeing through their eyes.”

While not wanting to paint exactly as Rembrandt painted, Otterstad finds one of Rembrandt’s characteristic techniques very useful. Rembrandt often began his works by creating a black or dark brown background. This process has proved to be one of Opie’s favorite ways to begin a painting. His early works were composed on white or light yellow grounds. Now he finds that starting with a black ground adds a powerful depth and interesting sense of light to his paintings.

Opie also experiments with different tools of his trade to find the ones that give his technique the most power. Rigorously trained in representational techniques, he has the skill to paint photo-realistic portraits and scenes. However, as he describes below, he prefers a different route to increase the impact of his work: 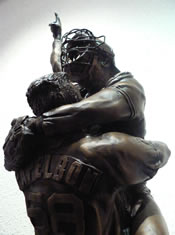 “Using defined tools like brushes, I have the ability to be precise and paint exact representational images, but that doesn’t give me the most pleasing results. I learned a technique from the Post-Impressionists for freeing your painting style. I purposely take control away when I forego the paintbrushes and pick up a palette knife. Painting with a palette knife, I have no precise control. The paint controls more of what I do. The paint surprises me. Then I’m happier with the results. Interestingly, the same kind of process works in my life. The more I let go of controlling everything, the happier I am with the results.”

In the late 1980’s Otterstad began painting professionally at a time when mainstream art was shifting from predominantly conceptual styles to Pluralism, that is, a lack of dominance by any one style. Modernist Pluralism came out of earlier Surrealism that employed a juxtaposition of seemingly opposing elements painted in realistic techniques to create a new emotional vision that included symbols and mythic references. Using realistic painting to communicate emotional messages was part of the techniques of several artists that Opie lists as major influences on his style, including Lucien Freud, Francis Bacon, Philip Guston, and Jean-Michel Basquiat.

“Precision is not the opposite of mystery.” ~ Louise Gluck; www.powersofobservation.com 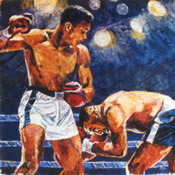 The results of Opie’s efforts have brought him commissions from individual athletes, teams, and sports organizations in every sports field, including golf, boxing, cycling, ice hockey, and football, with patrons filling his order docket to overflowing from sports stars, businesses, actors, and music celebrities. His assignments include commissions to paint former Houston Astros’ pitcher, Roger Clemems, and former Astro, Nolan Ryan, as well as tributes to the birthday of San Francisco Giants manager, Felipe Alou, and the 20th anniversary of basketball’s Los Angeles Lakers 1985 championship series with the Celtics. Besides commemorating historic athletic events for generations to come, Opie hopes that part of the results of his work will be to bridge a divide between the worlds of sport and art that he believes are mistakenly seen as unrelated. This point of view echoes the Olympic code that promotes sport and art as two aspects of a balanced character. He also champions the role of representational art in transmitting as profound a message as abstract art can.

Along with his extensive experience painting individual portraits, landscapes, jazz music themes, and all kinds of sports themes, Double Aught has become especially well-known for his paintings about the quintessentially American sport of baseball. Opie was commissioned by Major League Baseball to paint several World Series Championship team paintings. Always supportive of the home team, he also is the official artist of the Texas Baseball Hall of Fame.

In keeping with his respect for history and his love of surprises and mystery, Opie has become known for often adding an extra layer of history into his paintings by under-painting or shadow-painting characters into scenes that are usually only visible on close inspection. In Opie’s painting, “Ghostrunners,” an attentive viewer can see the pale ghosts of famous baseball players standing on the bases near the children. Even when engaged in a friendly backyard pastime on a drowsy afternoon, sports fans of all stripes are linked to the history of the greats as they dream of following the great ones. The shadow images also contribute another layer of emotional texture and veracity to the painting when they remind us that most Hall of Fame giants that we idolize from afar today started out just this way, as little boys and girls in small town games hoping to live up to the examples of their heroes.

Opie’s love of sport and its history shows in his celebrated paintings and keeps his work in high demand. His love of home and roots shows in all his artworks. Infected with that characteristically American drive to explore whatever shimmers beyond the next horizon, he also loves the life of an itinerant artist, travelling America, being Sport Art’s Troubadour, visiting his friends, swapping stories, and spreading his enthusiasm for the achievements of his subjects and for the enlightening powers of art.

“Why think about that when all the golden land’s ahead of you and all kinds of unforeseen events wait lurking to surprise you and make you glad you’re alive to see?” ~ Jack Kerouac; www.thinkexist.com 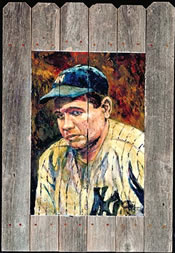