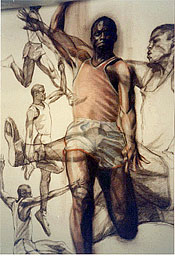 The girl who dreamed of becoming a star swimmer growing up instead became a ground-breaking woman in the sport art world. Wolk was the first woman to be commissioned by Major League Baseball to do the cover for the Official World Series program. She had an exhibition in Cooperstown, New York, home of the National Baseball Hall of Fame, and a drawing of Yankees legends Lou Gehrig, Babe Ruth and Joe DiMaggio, drew critical acclaim.

Wolk also created Winter Olympic posters for the 1980 Lake Placid hockey competition, best known for the United States’ “Miracle on Ice” gold medal moment. She also had an exhibition at the 1984 Winter Olympics in Sarajevo, Yugoslavia and was commissioned to produce works for the 1988 U.S. Olympic team depicting ice skating, skiing, hockey, swimming, gymnastics and track and field.

A special spread called “Pastel on Ice” in the National Hockey League (NHL) official magazine also attracted special attention. Her magazine essay was done “…on 100 percent rag cotton paper with oil pastels.” In a press release announcing her as the 1987 Sport Artist of the Year, Wolk said she used an elongation effect for the NHL essay because:

“It is hard-core hockey and when you know the anatomy you can distort it and the stretching effect captures the movement.” She described the blurred image as “a fusion effect.” Her goal in the painting was to create a dreamlike calmness and let the viewer of the painting use their imagination.

Wolk’s career eventually turned in another direction, but she picked up her share of honors and recognition along the way. Her portrayals of athletes and their struggles and successes helped Wolk earn the 1987 Sport Artist of the Year award from the United States Sports Academy. Her legacy in the sport genre was secure. In another groundbreaking moment for Wolk, she was the first woman to be honored by ASAMA.

Wolk was lauded by the co-chairmen of the ASAMA Art Committee when she was named Sport Artist of the Year. Jane Williamson and Faye Earnest Carr were impressed with “Ms. Wolk’s unique use of an art medium normally thought of for only still lifes, flower studies, landscapes and formal, posed portraits.”

Wolk once said: “I love sports because of the energy.”1 It is the same energy bundled into her paintings that brought her work to the attention of the sports world and the ASAMA Art Committee, leaving behind an impact in the sport art community that endures.