“Sports Heights in High Contrast” – 1993 Sport Artist of the Year 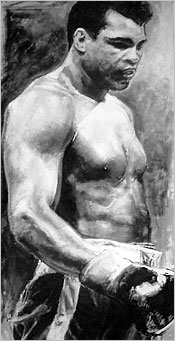 From Ali to Yogi, from Bogart to Brando, from Eastwood to Evel Knievel, the “tough guys” of sports and celebrity are what Holland excels at painting. Yet his path to glory in high gear as a painter of the toughs didn’t start out that way. As a boy in the Bronx in the late 1940s and early ’50s, Holland was temporarily handicapped and unable to participate in sports. In high school, while he sat and watched his friends play, he kept his pencil and paper nearby and sketched the action, imagining what they felt.

As a young artist in New York City, Holland attended The School of Art and Design, the Art Students League, The School of Visual Arts, and Pratt Institute. Although abstract expressionism was the popular style of the times, Holland had a passion for figurative painting. Starting out, Holland could not afford to hire live models, so he drew human studies from photos in boxing magazines because the action was intense and the highly developed athletic bodies were visible and offered the perfect images for the feelings he wanted to capture in paintings. Holland moved to San Francisco in the 1960s and became involved in the hippie scene of Haight-Ashbury and the Summer of Love. In the 1970s, Holland worked at commercial art and raising a family. It was not until 1989 when Holland received a commission for a series of paintings from the Los Angeles Kings that he considered devoting himself full-time to a career painting the professional athlete. Holland joined a Santa Monica gallery specializing in sports and entertainment art, and his course was clear.

In the early ’90s, Holland and his wife J’Nelle began self-publishing limited edition art prints, beginning with Holland’s painting of Muhammad Ali, and more editions of other athletes soon followed. His signature black and white style set him apart from other sport artists, and the paintings quickly became hot commodities among celebrities and collectors.

The American Sport Art Museum and Archives in Alabama named Holland their 1993 Sport Artist of the Year. Among many honors, his works are featured regularly on ABC’s 60 Minutes specials and on NBC’s Sunday Night Football biographies. In 2009, the Denver Avalanche hockey team chose Holland as its artist, commissioning ten paintings to capture its history. Today, the quiet boy on the sidelines has found his place at the center of sports history.

“Holland’s list of painted subjects has become a (sports) hall of fame of its own… And when it comes to the biggest names… Well, they just ain’t at the top, if they have yet to be captured by Holland.”
Limelight Agency, March 4, 2009 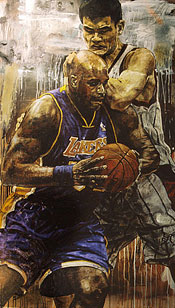