“I like the drama of sports the way you see it on a TV close-up – like a slow motion replay. I like to freeze-frame the image and display it.”
Stephen Holland, Vintage Gallery Bios 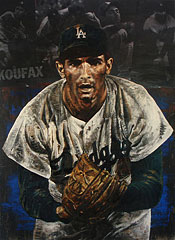 It’s a familiar sight at Los Angeles Kings hockey games to see Holland on the edge of the ice poking his camera lens through a hole in a barrier to get a closer, more dramatic shot of the players. In 1989, he was named “Official Sports Artist of the Kings.” The team’s private offices at the Staples Center look like a one-man gallery of Holland’s art.

Holland has painted the greats from almost every sport. When he begins his research for a painting, he searches through hundreds of sports images for a photo that captures the subject’s unique skill. On preparing to paint baseball great Jackie Robinson, Holland was looking for several things. “One, the feeling he was sliding. I chose a photo for me that really showed the action. It was interesting from the athlete’s point of view, that was very important. I remember moving the hat more backward and tilting the photo I looked at so it just was more exciting visually.” Holland translates his composite images onto canvas, isolating the player’s defining gestures, action, and triumphal moment. Athletes are at the top of the list of Holland’s greatest fans. Former Dodger outfielder, “Sweet” Lou Johnson said when he saw the Robinson print:“I’ve seen a lot of paintings of Jackie. This one struck me because of the facial expressions of Jackie – the intensity to win.” 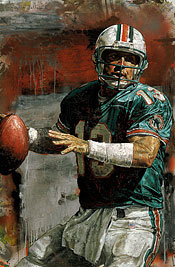 Holland finds the determination and hard work required for an athlete to be a winner a deep inspiration. He directs the same level of discipline and devotion into his art. Holland’s palette is often black and white or black and white with a few small areas of light tints. This high contrast palette suits his gritty subject matter. He employs a variety of media from acrylics and spray paint to pencil and crayon. He’s even known to use mud mixed in paints. The background is a loose wash with the detail reserved for the figure and the action. When Holland uses a palette of bright colored paints, he achieves the same intensity of contrast. Holland cites Rembrandt’s shadowy painting, “Night Watch,” as a major influence on his style. In the mid-’90s, Holland began experimenting with color, first as tints within the black and white pieces, and then as bright, mixed media backgrounds that evoked the loud, high energy, multi-ring circus that professional sports had become.

“It’s not so much about the rendering but about the form, shapes and colors. That’s what makes it rich and delicious for me.”
Stephen Holland, Artifacts Gallery Bios

In painting, a precursor of Holland’s style is the depiction of boxing by George Bellows in the 1900s. Earlier paintings by English masters such as George Stubbs in the 1700s and the French Impressionists such as Renoir and Sisley in the 1800s portrayed sports as the elegant occupation of the aristocracy. Games unfolded on manicured fields at exclusive clubs where a gentleman sportsman could round out his classical education with physical fitness. In America, the democratization of sports led to portrayals of the rougher, savage aspect of sports among all classes and a newfound reverence for the toughness of the working class. Technical advances in the 1900s in photography that allowed a viewer to stop a film frame to examine a position of a split second gave Holland the ability to select more dramatic moments of action. The black and white palette of news photography that dominates many of Holland’s works conveys an appropriate mood of raw realism. 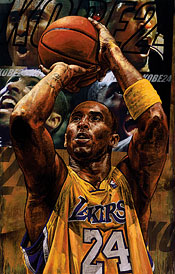 By the beginning of the 1900s, America’s motto was “faster, higher, stronger, bigger. This fixation on achievement led inevitably to the ‘sportification’ (‘Versportung’) of culture and society. Just as inevitably, the rage for sports left its mark on American painting, drawing, photography and cartooning.”

A wood panel is Holland’s preferred canvas. On this he swirls layers of gesso, then house paint for texture, then rough sketches of figures. Along with paper images and stencils, swashes of spray paint and watery acrylics are applied to create his signature backgrounds that often drip off the edges carrying the action out from the canvas. Built along with his basic black forms and white highlights, the loose color layers of his painterly style intensify the work’s emotional impact.

Holland’s tough heroes are freeze-framed in his paintings at the height of performing their characteristic moves, “faster, higher, stronger, bigger.” Holland may not have begun his life as a sportsman, but he has gained the spirit of a great athlete from his intense identification with the skills of sports greats. Now living in California, Holland has become the tough guy of sports painting with his accurate, powerful portrayals of their action during peak moments.

“I wasn’t interested in sports until I started working at it as an artist…As a kid, you play basketball and imagine you’re Michael Jordan. That’s what I feel like when I’m starting to look for photos of athletes, trying to pick something out. For me, you’re the athlete. You’re sitting on your bed with a football thinking, ‘Montana goes back to pass…’ I didn’t have that feeling as a kid. I do now.”
Stephen Holland, Dodgers Magazine, 50th Anniversary, 2008