“Capturing the Classics” – 2005 Sport Artist of the Year 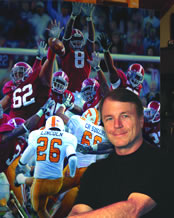 When Alabama began to produce some of college football’s greatest teams, it required a great sports artist to record that history. In Daniel A. Moore, the perfect combination of artistic ability, athletic sensibility, and home state loyalty fused to create this remarkable artist who would develop into the finest chronicler of some of the most legendary moments in Alabama sports. During his distinguished career, Moore has produced a multitude of excellent paintings of significant moments in various sports in many areas, but none as memorable and well-loved as his portraits of great moments in Alabama football.

This natural combustion process for great sports art was ignited by an accidental fuse in an unlikely place. While working after college as staff artist for Alabama Power Company, Moore was asked to create an illustration of a runner for the company’s magazine. Given permission to produce a poster from the resulting painting, Moore advertised his posters for sale in Runner’s World magazine for $4.50 each. Moore was surprised by the number of sales of the poster and, at a friend’s suggestion, decided to try a football painting next. He produced a limited edition print from his first football painting, “The Goal Line Stand.” This print generated more revenue than the runner. It was so successful that it enabled him to start his own publishing company, New Life Art, Inc. The career of the artist who was to become world-renowned for capturing classic American sports moments was launched. 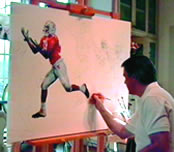 Birmingham, Alabama is where Daniel A. Moore was born in 1954, where he still lives, and where he created both his major series of American football paintings as well as a heightened regional enthusiasm for the state’s college sports. During Moore’s formal painting training at University of Alabama in the mid-1970s, he developed a deep affinity for the exacting art style of Photo-Realism. This interest went against the grain of most of his teachers who gravitated toward the Abstract Expressionism that was in vogue at the time. Moore followed his instincts and the solitary encouragement of his watercolor teacher, Richard Brough, to pursue development of skills in representational drawing and painting. This solid foundation in realistic graphics would enable him later to convey sports events with accuracy and detail that would add value and meaning to all his commemorative paintings. 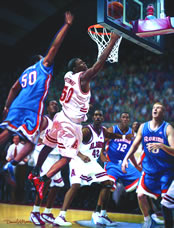 One of Daniel A. Moore’s most extensive and demanding projects was his series of watercolors depicting highlights of 40 years of historic college football games between arch rivals, Auburn University and University of Alabama. The extraordinary series of 41 paintings of defining moments of the games between 1948 and 1988 took two years to complete. “Enjoy the memories as Iron Bowl Gold takes you back in time for a look at college football’s greatest rivalry – back to the days when Legion Field thundered and swayed during these classic confrontations between the Auburn Tigers and the Crimson Tide.” Daniel A. Moore, Iron Bowl Gold, New Life Art, Inc., p. vii 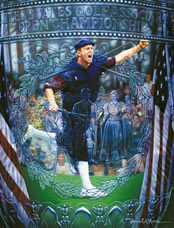 Reflections of a Champion

Published in 2005, the beautiful hardbound coffee-table book, Iron Bowl Gold, features Moore’s paintings along with the text from many Birmingham News firsthand sports articles. The narrative is also enriched with play-by-play commentary by famed ABC Television sports commentator, Keith Jackson who had been a Marine serving overseas the year that University of Alabama and Auburn University resumed their friendly football rivalry. After his military service, Jackson returned home to become the devoted on-air voice for the games that had lifted his spirits from afar. “In 1948, I was a young Marine stationed at a small air base on the Shantung Peninsula near Tsingtao in Northern China… There were quite a few of us with southern ties, so interest was keen in the resumption of play between Alabama and Auburn… In those days, television had not found its way into the American Way – and we certainly didn’t have it in China – but sometimes a Fox Movietone newsreel, which usually included some sports, did get passed on to us. When it did, we would wear out the sprocket perforations on the 16-mm film.” Keith Jackson, Iron Bowl Gold, New Life Art, Inc., p. xv

Iron Bowl Gold is not only an enthusiastic telling of a defining era in college football, it is also an historic record of a more athlete-centered era in sports than today’s income-centered sports world. The years when the two colleges played out their rival games at Birmingham’s famed Legion Field were golden years due to an important dynamic. An especially upbeat mood to the games was created by the organizers’ decisions to hold the games at neither team’s home field and to split the tickets 50/50 between the two teams’ fans. This meant that the stadium audience was equally split between their two supporting groups who were able to offer equal cheers for their side. This balance of the fans maintained team and audience spirits and produced a series of games whose beyond-the-call-plays and alternating outcomes became the stuff of legends.

“I loved the classic Iron Bowl. I loved it then, and I love it now. But there was just something special about playing that game in Birmingham. No one had the home-field advantage. I have vivid memories of every Alabama-Auburn game I participated in – as an assistant under Coach (Bear) Bryant and as Alabama’s head coach.” Gene Stallings, Alabama Head Coach/1992 National Coach of the Year

In 2005, the United States Sports Academy named Daniel A. Moore the Sport Artist of the Year for capturing, “the spirit and life of sport so that future generations can relive the drama of today’s competition.” Moore was the first Alabamian to receive the prestigious, international award. In 2007, the United States Sports Academy responded to Moore’s idea for a game of the year award by instituting a College Football Game of the Year Award. Moore captures the spirit of the winning game each year in an original painting.

In 2005, Moore, the devoted supporter and master chronicler of Alabama football was sued by University of Alabama for supposedly violating their trademarks when portraying their football players in accurate uniforms in his paintings.

“This lawsuit is the equivalent of the Catholic Church suing Michelangelo for painting the Sistine Chapel.” ~ Keith Dunnavant, Alabama alumnus & Author of “Coach: The Life of Paul ‘Bear’ Bryant; Birmingham News, November, 2009

After five years of litigation, a federal district judge recognized Moore’s artwork was protected speech/expression under the First Amendment and ruled that his paintings and prints of University of Alabama football had not infringed upon the University’s trademark rights. Even though this was a victory for the First Amendment, it marked the gloomy end of any pretense of sports’ non-domination by big business. Ironically, this shift to more impersonal times has heightened the appreciation of Moore’s unique artistic presentations. Contemporary dynamics of the sports world make Moore’s superb paintings of classic sports events even more valuable and heartwarming than ever.

With characteristic equanimity, Moore celebrated his artistic victory but never transferred his two daughters enrolled at the University of Alabama to another college or lost his affection for it. Even so, perhaps his pride in his alma mater will never exceed that of legendary Alabama Coach Paul “Bear” Bryant who quipped, “If you want to walk the heavenly streets of gold, you gotta know the password, ‘Roll, Tide, Roll!’”