“Ambassador of Olympic Art ” – 1996 Sport Artist of the Year

“Sport may be our world’s most cherished tool for collective peace and cohesive progress.” ~ Liston Bochette 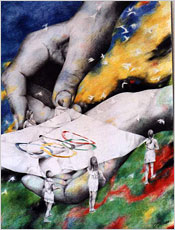 What dream could have guided a young man starting his athletic career on a tropical island to become a champion in the snow sprinkled sport of bobsleigh? What vision inspired a top-notch pro athlete to design stage sets for a Miami dance show? What perception motivated an Olympic decathlete and bobsleigh competitor to found a reunion association for Olympic athletes? When that champion is Liston D. Bochette III, a master of unlikely combinations, to those who know him, the achievements come as no surprise. For this academician-athlete-artist-administrator who spends much of the year globetrotting to promote excellence in sports and art, mastering the unexpected has been a lifelong occupation.

Bochette benefitted from the joys of a healthy, athletic upbringing and the richness of a multi-cultural environment in Florida and later in Puerto Rico. As an adult, Bochette wanted to spread some of this stability and global perspective around.

“Every youth should be given the best advice possible and instilled with the finest sporting morals we can provide.” ~ L. Bochette, “Education” 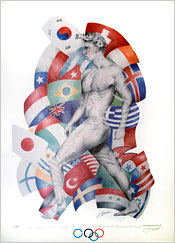 Bochette was an All-American in Track and Field and went on to enroll at the University of Florida on an athletic scholarship. His record there in the decathlon still stands after a quarter of a century and has placed him in the Hall of Fame. Bochette pursues all his interests, including his academic career, with the same zeal and scope as his athletic training. Bochette has a B.A. in Fine Arts from University of Florida, a Master’s in Humanities from Inter-American University and a Ph.D. in Education from Pacific Western University.

Bochette first participated in Olympic competition at the 1984 Los Angeles Olympics in Track and Field. He continued as a three-time Olympian for the Puerto Rican bobsleigh team (1992, 1994, 1998). He won an Olympic gold medal as an artist for his painting and drawing at the 1992 Barcelona Olympic Cultural Festival. In 1996, he was honored as the United States Sports Academy’s Sport Artist of the Year. Bochette established an International Cultural Consortium (ICC) with the aim of promoting Olympic ideals to a global audience. Bochette served as Secretary General for the World Olympians Association (WOA) for several years. He also served on the United States Sports Academy’s Board of Trustees, and on the executive board of Tampa/Orlando’s 2012 Olympic Bid Committee.

Although Bochette enjoys teaching at the university level, he never forgets the importance of top-notch early education. Deeply concerned with raising the training standards for young talent, Bochette coaches young athletes and speaks on the topic of the risks and rewards of athletic careers for young people whenever possible. The code of Olympic values that emphasizes balanced pursuit of athletics and art serves as a core guide for Bochette’s view of the healthy development of values.

“The time it takes to turn a young athlete into an Olympian is an invaluable investment in a better world for everyone.” ~ L. Bochette, United Nations speech

“The World Olympians Association unites Olympians from around the world regardless of their age, sport, nationality or other definitive measure and involves them in the promotion of the values and virtues that make the Olympic Movement … To leverage the global network of 80,000 Olympians and create an entity that benefits the Olympians, the Olympic movement as well as our general society, Olympians could be effectively mobilized in the fight against drugs, discrimination, violence as well as for spreading positive messages of fair play, protection of the environment, etc… The objectives of the WOA are set forth below:

Bochette’s scope of accomplishments creates a strong base for his role promoting Olympic values worldwide. He knows from experience the benefits of bringing together athletes from many nations in friendly competition. He knows personally how art and athletics can cross-pollinate and balance one’s development. In 2007, Bochette co-founded Art of the Olympians, a museum in South West Florida that showcases fine art produced by Olympic athletes. Bochette nurtures his talent for transforming unlikely combinations into new pathways. Bochette may have achieved his most lasting legacy as a multi-talented professional in his role as an ambassador of Olympic ideals and the artist-athletes who exemplify them. His special skill at bringing together varied venues and people to promote healthy exchange, balanced development, and multi-cultural friendship shines brightly throughout the world.