“I was diagnosed with spina bifida when I was six-years old, and I was told at that time that … I shouldn’t play sports. However, I’m the kind of person, even at that age, if you tell me I can’t do something then I’m even more motivated to do it. Right after that happened, I saw the 1968 Olympics… and I knew I wanted to be in the Olympics.” ~ Roald Bradstock,“Raise Your Game,” www.BBC.co.uk 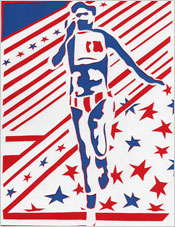 Sometimes an athlete’s star-quality personality becomes as much a part of his public influence as his athletic achievements. Roald Bradstock’s high energy, unflagging optimism, and multi-faceted talents have brought him well-deserved media attention and many enthusiastic fans. In addition to excelling in the arena of javelin throwing, Bradstock has made his mark as an exercise program developer, sports clothing designer, sculptor, and painter. Famous for his sense of humor in the service of sports, Bradstock has engaged in demonstrations of throwing various objects other than the javelin, such as golf balls, iPods, phones, and even fish. All these events play their parts in Bradstock’s effort to increase children’s awareness of athletics and especially of the Olympics.

“The principle is to promote athletics through imagery, which transcends language and cultures… to get kids of all ages to understand… to include people and get them directly involved in the build up (to an Olympics).” ~ Roald Bradstock, athleticsweekly.com

Born 1962 in Hertford Heath, England, Bradstock began drawing and painting when he was about five years old. Continuing his interest in art throughout school, he completed an advanced two-year sculpture program in one year at Turnford College. Also pursuing his passion for sports, Bradstock ranked #2 in the World Junior Division for the javelin throw in 1981. This victory gained him an athletic scholarship to Southern Methodist University in Dallas, Texas. He earned All-American awards in 1982, 1983, and 1984, and completed his Bachelor of fine Arts degree with honors. Bradstock represented Great Britain at the 1984 and 1988 Olympic Games. In 1986, he broke an 80m world record barrier by throwing a “New Rule” javelin 81.74m. These awards proved to be the impressive beginnings of a continuing series of awards in both art and sports. In 1994, the American Council on Exercise recognized Bradstock’s invention of a new use for a ball with exercises (trademarked as “Boll-o-Boll”) as a legitimate new exercise program. In 1995, Bradstock became an American citizen, although later he would revert to his British citizenship in order to make a bid for the 2012 Olympics. In 1996, he was an alternate for the U.S. Olympic team. He moved to Atlanta, Georgia in 1997. In 1999, Bradstock’s awards included the Ampersand Merit Award in the Juried National Art League Exhibition in New York, best-in-show in the National Sports Art competition in Florida, and first place in the United States Olympic Committee (USOC) Sport Art Competition. His public support of the Olympic Games through his art has gained him the nickname, “The Olympic Picasso.”

In 2000, Bradstock’s artwork won the USOC Sport Art Competition and was exhibited at the International Olympic Museum in Lausanne, Switzerland, during the cultural activities showcasing the 2000 Sydney Olympic Games. In 2003, Bradstock was honored as Sport Artist of the Year by the United States Sports Academy for his unique art style that promotes athletics and for his efforts to unify the Olympics and Paralympics. In 2006, he became a founding member of Art of the Olympians (AOTO), an Olympic revival movement including other sports icons such as Al Oerter and Florence Griffith-Joyner.

Bradstock spreads his efforts to promote Olympic sports to youth through placing short films of his varied object-throwing stunts on YouTube and touting his resulting obscure entries in the Guinness Book of World Records. Bradstock currently designs exercise clothing covered with colorful abstract designs that he wears to great audience delight when he competes. He wants to continue to participate in Olympic sports as long as his athletic condition allows. At his studio attached to his home in Atlanta, Bradstock continues to develop his art while maintaining a stringent athletic training schedule. Combining hard work with healthy humor, he comments that only three things might keep him from advancing beyond qualifying rounds for the 2012 London Olympic Games: “I’m short, slow, and old.”

In 2006, this tireless London-born international advocate for sports instigated a three-week business mission with organizers of the 2012 London Olympics to explore the possibility of implementing his vision for using art at the Games as a unifying, educational tool. His detailed plan is structured in six parts, each focusing on a different means of combining art and athletics to promote the Olympic tradition. Part 1 would employ large art and sports imagery in such media as murals and mosaics to replicate specific Olympic performances. Part 2 would take advantage of the fact that ‘Olympic Javelin’ is the nickname given by the Games’ organizers to the high speed train meant to carry spectators into Olympic Park. Bradstock proposes placing images of medal-winning Olympic javelin athletes on the sides of the trains so that they can be seen speeding through the station. Part 3 proposes an educational program about Olympic history for young children as well as college students. Part 4 is a complex plan to organize the blooming flowers in the Olympic gardens into designs that create sports images. Part 5 would implement an over-sized version of the garden project to organize carefully spaced plants into sports images so large that they could be seen from airplanes landing at Heathrow Airport. These images would honor the famous British landmarks from prehistoric times carved into chalk rock mounds and only viewable aerially. Part 6 involves arranging nationwide art exhibitions at schools and universities to promote the alliance between art and sports as well as the upcoming London Olympic Games. As monumental a task as is his six-part plan, it should not be counted out by doubters. It comes from the athlete-artist-educator who continues to demonstrate that no obstacle is too big for him to tackle when it comes to spreading the good news about Olympic tradition. 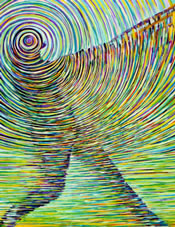 During 2009, Bradstock worked developing a new sport art workshop series with the United Kingdom’s Youth Sport Trust that is affiliated with over 500 Sport Colleges nationwide. The response to his workshops has been phenomenally positive from students and faculty alike.

In answer to requests for many more workshops, Bradstock will return to England in the summer of 2010 to present additional workshops and expand the program. His goal is to follow the founder of the Olympics’ vision to combine sport, art, and culture in education. Everyone looks forward to the next phase of Bradstock’s program with great anticipation.

“Communication is number one! What is more universal than sport and art? Most people are visual learners… It’s timeless. It crosses over cultures and it crosses technologies… Sport is the universal factor as it combines so many different elements as a sort of foundation course… Combining it with the art, technology, and the education, who knows where it may take you?” ~ Roald Bradstock; “Raise Your Game,” www.BBC.co.uk 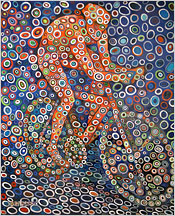