The Renaissance of RigeR – 1994 Sport Artist of the Year

“Any art… must transcend the actual fact. The universality of the picture, its intimate yet heroic scope, will give it clarity and strength.” ~ Robert Riger, “The Sports Photography of Robert Riger.” Random House, 1995 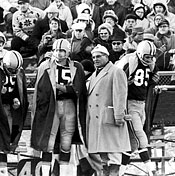 The Renaissance historically was a period in 15th and 16th century Europe during which a revival of the humanistic, classical influence inspired a flowering of the arts. A Renaissance man sought balance by pursuing excellence in every endeavor. Meaning literally, rebirth, the word, renaissance in popular terms refers to an expansion of creativity. Over his phenomenally productive lifespan, Robert Riger’s sport art career was continually being reborn in new forms and expanded excellence. Athlete, soldier, illustrator, painter, photographer, cinematographer, director, technical pioneer, and author, Robert Riger embodied the true Renaissance spirit.

Born in Manhattan, Riger attended the Merchant Marine Academy and served three years during World War II in the Merchant Marine. Working through 140 hours of drawing and using up five lithograph pencils, Riger made his first sports illustration of an Army-Notre Dame football game in 1945. He earned a bachelor’s degree from Pratt Art Insitute in 1947.

In 1950, Riger started taking photographs as research for his drawings. This addition to his skills was to send his work in a new direction. Between 1950 and 1994, Riger copyrighted over 90,000 master photographic negatives with over 40,000 of these covering pro football. The Baseball Hall of Fame added the original of Riger’s drawing of a Yankee’s game to their Cooperstown museum collection. As a freelance illustrator, Riger was a star contributor to Sports Illustrated Magazine that published more than 1,200 of his editorial drawings and 200 of his advertising illustrations.

“You cannot possibly photograph sport unless you understand it completely, and understand and know the men.” ~ Robert Riger 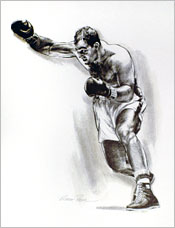 Riger understood and knew the men. He sometimes even ate, slept, and lived with his subjects. When Riger was chronicling the N. Y. Giants, Coach Jim Lee Howell placed one restriction on his joining the team’s practice: “Don’t get run over.” At the end of training, Coach Howell said to Riger as he held his sketchbook, “You ran the most – and bothered us the least.”

From 1963 to 1970 and again from 1977 to 1980, Riger worked at ABC television on various aspects of the sports presentations, including his incisive on-camera coverage for their Wide World of Sports. Riger developed a ground-breaking advance in using slow-motion video during sports broadcasts that added to TV reporting his signature technique of seeming to stop a key moment so that the viewer could examine every part. He won nine Emmy awards for his work. In keeping with his habit of doing everything topnotch, Riger married Eleanor Sanger, ABC’s first woman sports producer and an Emmy Winner herself. 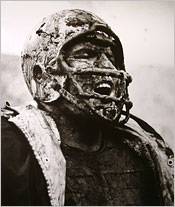 Victory in the Mud

Riger covered Olympic sports news in 1968, 1976, 1984, and 1980. Hollywood director, John Huston hired Riger as Second Unit Director in 1981 to create his acclaimed soccer sequences in the film, Escape to Victory, starring Sylvestor Stallone. Riger illustrated a children’s book, Come on Seabiscuit!, on the remarkable racehorse that inspired Laura Hillenbrand to write her famous book later made into an award-winning movie. Riger’s images continue to be selected by sports fans and other artists as the most dramatic and insightful records of sports highlights.

“Riger is a documentary photographer… Like hundreds of thousands of his contemporaries, Riger is drawn to the dramas of the great stadiums. Among all those thousands, perhaps none has seen the game more clearly.” ~ John Szarkowski, Director, Dept. of Photography, The Museum of Modern Art, N.Y.

In 1994, Riger was named Sports Artist of the Year by the American Sport Academy Museum and Archive in Alabama. At work on his 13th book in 1995, Riger learned that he had terminal cancer. He continued working and completed the book, along with preparations for an exhibition of his photographs at the James Danziger Gallery in Soho. Married twice, Riger had six children. He once said about his art: “The same intensity they have to play the game you must have to record it. Not stop it, but suspend it forever in time” (Wikipedia). Thanks to Riger’s dedication to excellence and his remarkable productivity in many fields, we can experience the thrill of his selected great sports moments again and again. Riger’s drawings and photographs have transcended the world of news and illustration to be valued as groundbreaking fine art and held in museums and distinguished private collections.

“I have chosen the one (photo) of the jockey Tony Despirito… he is the athlete personified, the power and the will… It is not only a stunning photo, it is probably as close as I will ever get to owning an Eakins.” ~ David Halberstam, The Sports Photography of Robert Riger,” Random House, 1995