“The powers of darkness will, in time, be crushed by the spirit of light.” ~ Boris Pasternak, author; www.thinkexist.com

The virgin white canvas before the first stroke of paint, the blank marble block before the first chink of a chisel, the long silence before the first notes of musical inspiration — art in every medium includes a cycle of creating something out of nothing. Some artist’s personal stories mirror this process more graphically than others, becoming portraits of how to emerge from recurring flames of destruction to build a productive life again. The remarkable journey of Russian sculptor, Sergey Eylanbekov has evolved through a series of early triumphs, severe losses, and hard-won comebacks into the prestigious, international art career that he has built today.

Born in Russia in 1960, Eylanbekov showed talent for art as a youth. At age 13 he entered the topnotch Moscow School of Fine Arts. At the age of 17, he was accepted into the acclaimed Moscow Surikov Academy of Fine Arts. In addition to taking courses in literature and history, students drew and sculpted from live models for six to seven hours a day. After six years of study at Surikov Academy, Eylanbekov graduated with honors.

Torso of a Wrestler in Process

Then, politics reared its head to interrupt his career plans. Under government regulations, he was obligated to serve a minimum of two years in the Russian Army, which he did reluctantly, remarking, “It doesn’t feel right to carry a gun after 10 years of studying art.”

On completion of his years of army duty, he took up his art work again. Living and working in a centrally-located studio in Moscow that he exchanged for teaching art classes to children, Eylanbekov exhibited his artworks and completed private and public commissions. A number of his works were purchased by museums as well as individual collectors. The powerful Russian Ministry of Culture procured several of his sculptures for important museum displays.

“For a country to have a great writer (or artist) is like having a second government. That is why no regime has ever loved great writers.” ~ Aleksandr Solzhenitsyn, author; www.thinkexist.com 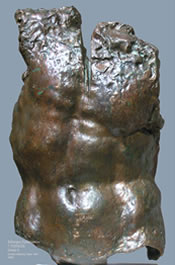 Eylanbekov’s studio’s prime location and minimal “rent” became a double-edged sword. During this chaotic time in Russian history, work space in the center of Moscow was given to those who could pay the most to the local government. In 1989, Eylanbekov’s offer was trumped by a larger one, and the government forced him out. In a desperate attempt to salvage his career, he maneuvered a way to leave Russia the same year and immigrate to the United States. Landing in New York City, speaking no English and without funds, contacts, or influence, he was forced to start over from nothing.

Eylanbekov’s professional road to success would prove to be a hazardous, difficult one. Not savvy about American business practices, he fell into many pitfalls dug by unscrupulous industry bosses and art dealers. Eylanbekov first took menial work in a Manhattan print shop. Next he switched to a company that specialized in mass produced reproductions of famous classic and contemporary sculptures. Eylanbekov’s fine art reproductions became endorsed by many major US museums. His long years of perfecting sculpting skills and his extraordinary talent for representational figures quickly made his work for the company very valuable, but he longed to escape into producing his own original works.

“Justice is like a train that is nearly always late.” ~ Yevgeny Yevtushenko, poet; www.thinkexist.com 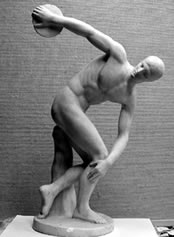 As much as time and budget would allow, he continued sculpting and producing his own works in bronze. He also played the guitar in a New York band until the demands of caring for two young children took precedence. As a result of showing his paintings as well as sculptures, gradually, Eylanbekov’s exceptional talents came to the attention of important collectors in the New York art world and also art aficionados in other parts of the world. In 1991, Eylanbekov was inducted as a Professional Member into the prestigious United States National Sculpture Society. In spite of many difficulties during this time of struggle to adapt to a new country, positive results from his years of hard work began to emerge. In 1992, his portrait of President Reagan was placed in the Presidential Library. More commissions and exhibitions followed. Included in his early works is a bronze bust of football great, Frank Gifford, that sits in the sports star’s private home. In 1996, he was elected a National Sculpture Society Fellow and in 1997, was chosen to sit on the National Sculpture Society’s Board of Directors. 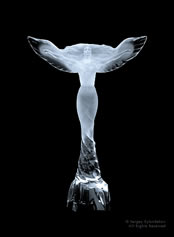 Eylanbekov was also pursuing a new passion for producing sculptures in the innovative medium of sculpture-grade acrylics. His beautiful, multi-dimensional images brought him more acclaim. The year 2000 marked his premier acrylic sculpture unveiling. This artistic exploration would lead to significant advances in his career.

“I am fascinated by acrylic. Its transparency opens the door to a whole new world of the visible and the invisible in three dimensions.” ~ Sergey Eylanbekov

In 2002, he became an Official Artist for the Salt Lake Olympic Winter Games. He also produced the magnificent work that became the US Olympic Team Commemorative Statue. In 2003, Eylanbekov’s sculpture titled, “Five Continents,” won the United States Olympic Committee’s Sport Art Competition and was then entered into the international competition. Competing against entries from 39 countries, Eylanbekov’s sculpture won the International Olympic Committee’s (IOC) Sport Art Competition for the 2004 Athens Olympics. This award marked an important career turning point and brought significant new international attention to Eylanbekov’s work. “Five Continents” was scheduled for permanent display at the Olympic Museum in Lausanne, Switzerland, after being exhibited at the 2004 Olympic Games in Athens. Also in 2004, the United States Sports Academy’s American Sport Art Museum and Archives (ASAMA) named Eylanbekov the Sport Artist of the Year. With great respect for Eylanbekov’s artworks, President and CEO Dr. Thomas P. Rosandich of the United States Sports Academy became one of Eylanbekov’s most enthusiastic admirers, helping his work find more exposure around the world. 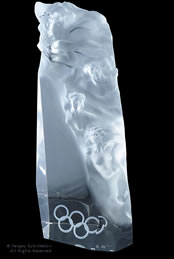 The artist’s life cycle came full circle in triumph as he was honored with an exhibition of his sculpture at the Museum of Modern Art in Moscow in 2006. That same year provided another honor when his “Seven Tormented Bronzes and Other Works” went on display at the United Nations Secretariat Building, United Nations Headquarters in New York. Eylanbekov worked for several years on various projects in Italy, including preparations for submitting his sculpture for the Ibsen Park in Norway.

April, 2010 brought Eylanbekov the honor of presenting his sculpture, “Victory,” as the official Business Council for International Understanding (BCIU) International Peace and Harmony Award to the First Lady of Malaysia at a ceremony in New York City. Continuing his worldwide recognition, Eylanbekov won an international competition for his sculpture in honor of the Norwegian playwright, Henrik Ibsen. Titled, “Peer Gynt & Three Herd Girls,” the seven foot bronze has an installation date of August 2010 at the Henrik Ibsen Park in Oslo.

Currently, Sergey Eylanbekov lives on Long Island. He teaches drawing and sculpture freelance at various institutions, including Farmingdale State University of New York, Lyme Academy College of Fine Arts, and Brookgreen Sculpture Gardens in South Caroline, while also pursuing his sculpting. Eylanbekov’s mastery of sculpting the human form puts him at the top of his profession and brings him special acclaim in the field of sport art. His challenging journey has taken him around the world and brought him to his rightful place in art today as one of the finest and most inspiring contemporary sculptors.

“Art is a human activity having for its purpose the transmission to others of the highest and best feelings to which men have risen.” ~ Leo Tolstoy, novelist; What is Art?