“I attack a canvas like I play soccer – with vigor.” ~ Aldo Luongo 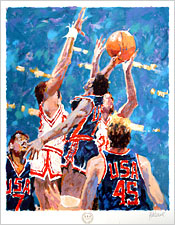 Creating direct, passionate and positive images, Luongo painted in a manner that exhibited many elements of 1900s Post Impressionism. Impressionism originally had spread through the Neo-Classical art scene of the late 1800s like a fresh wind blowing out the old reverence for ideal archetypes and ushering in realistic visions of the artists’ everyday world. Impressionists recorded familiar scenes with the love of detail of a scientist and the precision and intimacy of the recently invented camera.

In Argentina, a key turning point in contemporary art emerged in the 1950s:

“Modernity Vanguards were taking up the stage of world art. Latin American identity was developing within its limits returning to itself, to its sense of uniqueness; having been born under the aegis of European influx and developed in the margins of an outer world, … it began to look inside its self sense of aesthetics and culture, stories and histories.” ~ Bob Frassinetti, Art & Antique Dealer, Buenos Aires; Buzzle.com

Within Argentine art, the conflict of local influence with the foreign, of indigenous with the European would reach a solution two decades later. 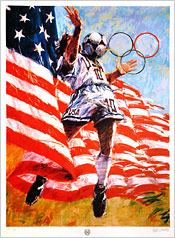 Post Impressionists pursue many of the goals of the early Impressionists, adding their unique social influences and individual philosophies to their works, including looser abstract styles and more fanciful rather than strictly realistic subjects. Luongo describes his style as, “Romantic Impressionism.”

“Every artist adapts the best qualities of his favorite artists, but I’m always conscious of capturing bits of life, of reality, of situations, of people. It’s my space in time.” ~ Aldo Luongo

Many of the characters in Luongo’s paintings face forward and seem to be propelling themselves out of the canvas toward the viewer. In his painting, USA Olympic Downhill Skier, the single skier seems to be flying over sprays of bright snow out of the painting. The loose brush strokes, primary colors, large figure, and splashes of thrown paint convey the speed and intensity of a professional athlete in high gear. As in his painting of a soccer player titled, America’s Team, Luongo’s figures show an ease of motion and a pleasure in physical intensity during sport that only a painter who also is an athlete can convey. Luongo’s artistic flights are always athletic flights of grace and energy. 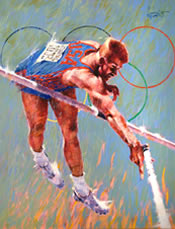 “Painting and soccer are like walking to me. So natural.” ~ Aldo Luongo

The Argentine tango, a dance style with characteristics that have become synonymous with the character of Luongo’s native country, shares qualities that dominate his paintings and draw the viewer closer to the physical contests portrayed. Essential to the Argentine tango is the struggle between opposite forces resolved in beauty.

“Central to all of (my) paintings is the balance between memory and hope, sorrow and humor, freedom and control.” ~ Aldo Luongo

A statement by the seminal Impressionist painter, Claude Monet, expresses the fusion of opposite elements in art as the Impressionists saw it:

“Techniques vary; art stays the same: it is a translation of nature at once forceful and sensitive.” ~ Claude Monet, Artist to Artist, Jackson Creek Press; p. 233

Luongo resolves the opposing themes in his paintings through celebration of the multi-faceted character of The Hawk and the sensuous imagery of his domestic scenes. He invites the viewer to share the spiritual victory with the artist and the athlete. Luongo’s world renowned sport works inspire our spirits to soar along with the graceful vigor of his athletes in flight at the peak of their powers.