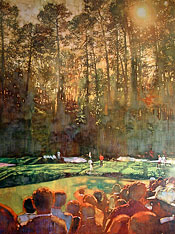 Fuchs was born in O’Fallon, Illinois, a small coal mining town outside of St. Louis, in 1932, to Leo and Florence Fuchs. O’Fallon, now a fast growing community, at the time did not have a hospital, and so Bernie was born at home.

Though his first art class was not until his senior year in high school, Fuchs remembered doodling in his school notebooks. He liked to draw Disney characters such as Donald Duck and Pinocchio. Fuchs was attracted to the work of illustrators in the day’s popular magazines. He recalled being fascinated by an illustration of a beer bottle with beads of sweat. He admired the work of illustrators Joe Bowler, Joe DeMers, and Coby Whitmore.

After his industrial accident, Fuchs enrolled in Washington University School of Fine Arts to pursue a degree in illustration. After his first year of school, Fuchs applied and was accepted to work in a puppet factory. Fuchs worked on an assembly line painting the heads of the Rice Krispie cartoon characters, Snap, Crackle, and Pop. Soon, Fuchs was fired for incompetence.

While at Washington University, Fuchs developed a relationship with a military veteran and fellow student, Walt Heanie. Fuchs admired Heanie’s ability to draw, and Heanie accepted Fuchs as a kind of protégé. “He gave me a book on figure drawing by Andrew Loomis, a popular New York illustrator and said, ‘you study these drawings,’” Fuchs said. “He would give me an assignment almost every day.”

Fuchs set up in his grandfather’s basement to work on his “assignments” at night. It was in that basement that Fuchs encountered the kinds of failures that only drive perfectionists farther. Fuchs said, “I’ll never forget throwing the paint, the brushes, the drawing board, and everything across the basement floor and against the wall and crying—literally. Finally I pulled myself back together, picked up the stuff and started over again. The next morning I would take it in to Walt and he would point out where I was wrong.”

Fuchs opted to obtain a certificate rather than complete the degree program at Washington University. He was eventually awarded with the Outstanding Alumnus award and a fellowship to work in Paris. Graduation from the Fine Arts program proved to be only the beginning of Fuchs’s long and prolific illustrating career.