Cristóbal Gabarrón – “The Maestro” – 1992 Sport Artist of the Year

“My philosophy is based on constant effort and always moving forward.” ~ Cristóbal Gabarrón, “Urban Landscapes” 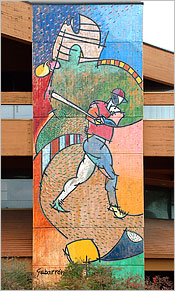 “Each one of the works of art that make up a series are, for me, fragments of the same subject, the chapters of a novel.” ~ Gabarrón, “Whispers in Silence,” p.256

The largest public art offering in the state of Alabama, the famed two story tall mural by Gabarrón entitled, “Tribute to Human Spirit,” graces one wall of the main USSA campus and has become a landmark on Mobile Bay’s Eastern Shore. In celebration of the Academy’s 25th anniversary, the mural is dedicated to the 50th anniversary of Jackie Robinson breaking the color barrier in professional baseball.

“Blending sport with culture and education, Olympism seeks to create a way of life based on the joy found in effort, the educational value of a good example and respect for universal, fundamental, ethical principles.” ~ Olympic Charter

“A Tribute to the Human Spirit” — An Interpretation

To commemorate the United States Sports Academy’s 25th anniversary, the renowned Spanish artist, Cristóbal Gabarrón has generously endowed the institution with one of the world’s great sport murals. The creator spent many months researching and developing his concept while in residence in Madrid.

With this work Gabarrón presents a definitive tribute to the allusive spirit of mankind, a spirit so highly exemplified by the athletic achievements of Jackie Robinson.

The mural itself portrays those most exalted and universal values found in sport: dedication, sacrifice, solidarity, teamwork, friendship… all of which contribute to the common goal of success. These treasured values represent and are required to attain the personal as well as the collective rewards every player yearns for.

It must be taken into consideration that the artist’s message is contained and somewhat confined by limitations held on a concrete wall four times as high as it is wide. Given those constraints, the artist constructed his visual statement in a powerful flow of verticality anchored down by the central image of a baseball player confronted by the crucial moment of initiating his swing at the ball. Furthermore, the artist has heightened the implied motion by lacing curved lines through a dynamic corridor of space that ball, bat and batter will follow.

Three essential elements – the helmet, the bat and home plate – connect, though not directly, touching one another to form a vertical axis. The dark, curving lines revolve around the elements to form an interpersonal assimilation of design. In turn, the central form is both supported and surrounded by the play of color hung throughout the rotational exhibition of force.

The mural can be evaluated and understood by unveiling the two interwoven levels of meaning contained within. The first of these is clearly the figure of a “man.” The overt simplification expresses the prowess of the human figure. The second is the “spirit,” which transposes the event by enveloping the act of the athlete. This implied union of static and kinetic force finds a complete and graceful form of development throughout the mid-panel of the mural.

The general structure of the work revolves around a series of symbolic images that become interrelated through the diverse use of color, tone and line. The linking of these elements throughout the mural creates a characterized statement about the physical and moral purpose of sport, those reflected by the Olympic creed – opportunity, equality and fair play. Religious, racial, cultural and ideological differences bow before this shared spirit. The single power that ensues fills the heart and soul of every player who enters the game.

Gabarrón has given special importance to the moment in which the player brings the bat into contact with the ball. The fractioned instant whereby the athlete shifts his weight over his center of gravity and floats atop his cleats is encapsulated by the array of color clustered around the act. This transfer of energy continues outward along the curving lines toward the bases.

The face of the athlete carries special connotations. It is a face without identity, divided between marked areas of black and white. Such delineation brought together on the profile of an athlete exhibits the promise of racial harmony that sport provides.

The larger silhouette found behind the central figure falls between the tonal shadows of sky and earth. The upper region, filled with rich blues, forms the expansive sky, the heavens which watch over the stadium lights. The sky falls to reach the fields, acting as the common uniform all players wear. Filled with the heat of the game, the energized atoms vibrate within the stadium walls. The physical and emotional heat of the game is portrayed through hundreds of vibrant strokes of color as if it were a festival of humanity that has invaded the stadium.

The hidden figure in silhouette represents that “larger than life” spirit. The upper silver area represents the catcher’s face mask. In one sense the mask provides protection from the impact of a foul ball. However, it also entraps the person behind it, not unlike imposed prejudice from which he so desires to escape. On the left portion of the mural the swing of the bat projects its passing power. The swing is an aggressive act conducted to advance the player’s dreams of glory.

Finally, the coloration on the sides is a personal comment for the brotherhood of two nations, the artist’s homeland of Spain and the United States, the recipient of the art work. From an artist of deep Spanish convictions, this mural is dedicated to an athlete with great southern pride and a symbol of even greater American prosperity: Jackie Robinson.