Kadir Nelson is widely acclaimed for his memorable sport art, including portraits of individual players as well as teams, and for his award-winning book illustrations. His artworks are held in many public and private collections, museums, and galleries, several of which are listed below. 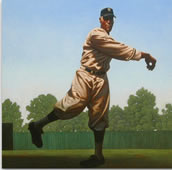 The Anatomy of Team Handball