“What moves men of genius, or rather what inspires their work, is not new ideas but their obsession with the idea that what has already been said is still not enough.” ~ Eugene Delacroix (1798–1863); Artist to Artist, Jackson Creek Press, p.126

Nelson may paint scenes from bygone eras, but his style is fresh, contemporary, and Pluralist, combining the best of classic, modern, and contemporary art styles to convey his visual stories. The inherited art gifts in his DNA include the rich art of storytelling. Nelson’s exceptional work as a book illustrator is a natural branch of his narrative painting style. As if absorbed by association with his California environment, several elements distinctly characteristic of West Coast art styles are prominent in Nelson’s works: the luminous tones of his colors, reminiscent of Maxfield Parrish; the pioneer loneliness of the vistas, reminiscent of Thomas Hart Benton; the sense of calm even in scenes of great action, reminiscent of Asian masters such as Hokusai and Gu Gan; the representational images used in the service of allegory, much as the sublime Symbolists did; the distortion of natural anatomy and color in the service of mood and message, as Expressionists encouraged.

When considering style, it is as inevitable as it is mistaken to equate Nelson’s images with Ernie Barnes’ memorable characters. If a viewer starts to dismiss Nelson as merely a disciple of the great Barnes, then the mastery of Nelson’s works is missed. That would be a great loss because along with a unique style, Nelson has many crucial and poetic things to say in his paintings about the place of Black athletes in history and the relevance of their heritage for society today. 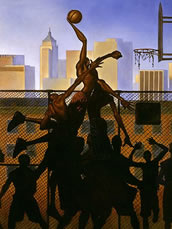 In a surface stylistic similarity, both Barnes and Nelson employ elongation of the human form in their paintings to communicate striving – but for very different goals. Barnes’ players are striving for group uplift. Nelson’s athletes seem to struggle on individual journeys over their personal lots and psyches. Compare Sugar Shack by Barnes with David and Goliath by Nelson. Barnes’ characters function together, united and urgent as a bee swarm, swirling across the canvas to find their place as a group in the world. Nelson’s athletes stand lonely, isolated even in a crowd, in their efforts to take higher steps on the ladder of excellence.

The core subjects of Nelson’s paintings are the inner psychological contests of the athletes: concentrating amid the chaos of team sports, reviving the will to excel after an upset, putting individual skills into play within the limits of group strategy, surpassing a personal best record, defying unjust social limitations. The winning players may stand tall as role models for sympathetic groups, but they seem to struggle as individuals.

The artworks of these two great painters mirror the evolving role of the hero during different times in American culture. The epic leader of Barnes’ generation was Dr. Martin Luther King. King’s brilliant skill as a revolutionary was in mobilizing large peaceful groups of people to act for human progress. As an inspiration to future generations, King’s historic success became a symbol to inspire people to act from their highest principles for the greater good. 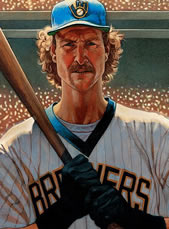 This heritage both unites people in their goals and isolates people in their solo journeys toward social justice in today’s very different and more impersonal world. Nelson captures this paradox in his paintings, through a sense of stillness even amid the frantic action of a competitive game, in the uneasy feel of a still frame poised for action. Nelson’s players are as individual and internal as Barnes’ are active and group oriented.

In Barnes’ paintings, no space goes unfilled with writhing, crowded, ecstatic human activity. In Nelson’s paintings, the real main character is the immense space between the players. Viewers can contemplate the ramifications of each moment frozen in time on Nelson’s canvases. Each whispering expanse between figures contains a ghost chapter from the long tale of the athlete’s inner struggles.

Over a quarter of a century has gone by since Ernie Barnes was honored as the first United States Sports Academy Sport Artist of the Year in 1984. Significant changes in professional sports have come to pass during those years. The anonymous gritty bands of gladiator brothers portrayed in Barnes’ football scenes of the early 20th century are emblems of the past. In their places are the brand name individual super stars in isolated struggles for professional survival under the constant scrutiny of the close-up lens and the big salary contracts. 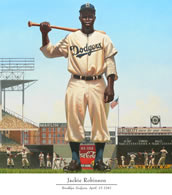 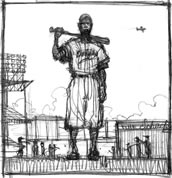 Barnes’ paintings celebrate the heights that the spirit of the group can achieve for its members. Nelson’s paintings extol what the individual can do for the progress of the group. Products of their times, they are casualties as well as beneficiaries of the conflict and progress of the moments in history into which each was born. The hero of a Nelson painting has for better and for worse, become indentified with that very American quest, the alienated striving of the individualist to overcome inner hurdles on the lonely way to the stars.

The silver lining in the cloudy skies is the transforming effect that sports well performed can have on its players and its audience. The spirit of the dedicated athlete has the potential to heal a community’s scars. The individual journey has the power to inspire millions. The stories painted and the portraits of history in Nelson’s paintings remind all of us to tap the power of the past and to reconnect with the traditional wisdom of the tribes of our origins. Nelson’s masterpieces of visual storytelling can launch viewers on many epic journeys of recovery and inspiration.