“I want to bridge sport and art and bring the Olympics and Paralympics closer together.” ~ Roald Bradstock 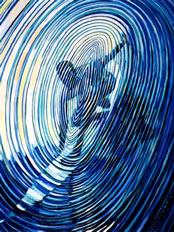