“I repeat lines and shapes, as athletes repeat movements and exercises, to capture power and energy. I want all my pieces of art to be unique, powerful, athletic and artistic statements.” ~ Roald Bradstock 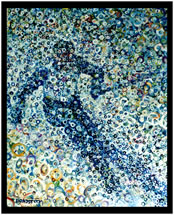 Roald Bradstock’s painting style exhibits many of the characteristics that have made this British-born javelin thrower both a well-loved sports spokesperson and a record-breaking Olympic medal winner. The mood of the majority of his paintings and prints is high-energy, bold, and optimistic. Bradstock often uses bright, primary colors to create signature background patterns of circular hoops, and clear foreground images of athletes involved in various sports. Drawing on elements of Europe’s New Realism and America’s Pop Art, his painting style is called by Bradstock, “Athletic Abstraction.” When asked about his source of artistic inspiration, he responds:

“The Olympics, anything to do with the Olympics… My art is all about reaching the youth and how they communicate.” (spikesmag.com/features/roaldbradstock 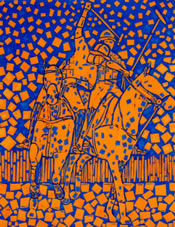 Bradstock believes that sports and art support each other and that art can teach young people about improving their athletics. When he was 19 years old, he was forced to choose between an art career and a sports career because of the school system.

“That’s one of the things I want to help change within education, so that other people don’t have to make that choice. There are more and more athlete-artists out there.” (bbc.co.uk/wales/raiseyourgame)

Bradstock’s bright nearly-neon color palette, geometric design backgrounds, and representational images of contemporary activities indicate Pop Art as a major influence on his style. Emerging in Great Britain and the United States in the late 1950s as the foremost avant-garde art style, Pop Art has three key characteristics: (1) it is both realist and figurative; (2) its manifestos urge artists to select subjects from their contemporary urban culture; (3) the works are designed to encourage viewers to take a fresh look at the powerful symbolism inherent in everyday objects.

Europe’s New Realism movement with its re-examination of the commonplace began to influence America’s Pop Art movement earlier in 1915 when leading French artist, Marcel Duchamp brought a New York collector some of his “found art,” an everyday souvenir of Paris sealed ceremoniously inside a clear plexiglass box. European and American artists’ ideas would continue to cross-pollinate as Dada, New Realist, and Accumulation art movements’ followers shared ideas and were inspired to move in the direction of recognizable subjects, an unnatural, heightened color palette taken from advertising, and a fascination with daily life objects and activities. 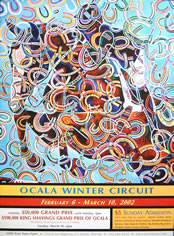 Bradstock believes that the qualities that improve his art also improve his athletics. His sports style is as intense and optimistic as his art style. Age 30 used to be considered over the hill for a top sports star. Today, better diet and training methods have raised that barrier to age 40. Looking on these numbers as mainly mental barriers, Bradstock sustains a positive attitude along with a rigorous training schedule. His goal is to be involved with the 2012 Olympics, hopefully as an athlete at age 50 and otherwise as an event designer and artist. Bradstock says that’s what the Olympics is all about – being inspired, taking a chance, reaching for the stars. Along with his Olympic-sized optimism in light of his age-related limitations, Bradstock maintains a balanced sense of humor:

Bradstock displayed another aspect of his game attitude when he agreed to participate in a mullet throwing competition. The first athlete to participate in this fishy event was Ken Stabler, the great Oakland Raiders quarterback from Alabama University. Exceeding the previous thrower’s pitch of 187 feet, Bradstock threw a wet mullet 196 feet 9 inches across the state line separating Florida from Alabama. 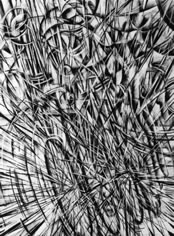 Bradstock’s athletic training has paid off in more serious arenas as well. In 2009, his throw of 72m was the fifth best by a British athlete of that year. It also set a new world age record and it boosted his hopes of competing in 2012. “Every day I go out and I can still throw, I’m very appreciative of it because I don’t know when it’s going to end.” (news.bbc.co.uk/sport) Repetitious training in the face of physical limitations and numerous sceptics have built Bradstock into one of the world’s finest javelin throwers.

Repetitious designs have become Bradstock’s trademark surround for his celebrated sports paintings. As he repeats his personal formula for success combining hard work and focused optimism, Bradstock inspires countless admirers to apply similar efforts toward achieving their own goals. Bradstock’s life mission to share the benefits of sport and art spreads the enduring spirit of The Olympics.

“I’ve managed to pursue both my passions and I’m living my dream… Part of the learning process is losing, failing… It ties in again with sport, art, and life… You move on and you try and do better next time.” ~ Roald Bradstock; bbc.co.uk/wales/raiseyourgame 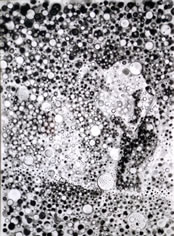