“His photographs are documents, and the best of them are also pictures that now have a life of their own, and that would have given intense pleasure to George Stubbs and Winslow Homer and Thomas Eakins.” ~ John Szarkowski, Director, Dept. of Photography, The Museum of Modern Art, N.Y. 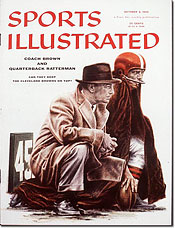 Riger approached each of his many art accomplishments with careful preparation and intense attention to detail. He studied the unique trademark plays of his subjects as well as the nuances of the rules of the games. He made sure he was in the right place at the perfect time to record what he sought.

“In some photographic circles, sports photography is thought to have mostly to do with luck or circumstances. That of course is just dumb… You are in position for the picture you want.” ~ Robert Riger, “The Sports Photography of Robert Riger,” Random House, 1995

Riger’s illustrations were as thoroughly researched and carefully conceived as his photographs. His art training served him well and gave him an overriding respect for technical skill and proper foundation.

“Drawing is the only thing I look for in a picture.” ~ Robert Riger, “The Sports Photography of Robert Riger,” Random House, 1995

Riger not only defined how we saw sports in photographs and film, he also defined for many people the way they viewed athletes through his exceptional drawings. His vignettes for Sports Illustrated Magazine captured the feel as well as the facts of football plays. His early drawings in the 1950’s and 1960’s of racehorses and their jockeys recall the respect for the horse-man partnership so revered and recorded on ancient Greek vases. Riger drew jockey and horse mostly in black and white, with delicate lines, and infused the poses with sensitive details indicating the mutual teamwork between the partners. At once intimate and monumental, horse and jockey stand drawn in their immense athletic dignity for us to admire in Riger’s deceptively simple drawings.

Riger started his early coverage of sports at a time in American society when athletes’ struggles went largely unheralded and their pay and acclaim was small compared to today. Open access to the athletes that would be unheard of today was commonplace, and Riger spent hours getting to know the players at close hand. Television and film changed the pace of reporting. In a faster medium than drawing, at just the moment in American culture when the new technology of film was speeding up the rate of our visual consumption, Riger showed us the pleasures and the knowledge to be gained from slowing down. He captured fleeting, heroic moments in his art and allowed us to savor them.

Riger has left the world with a remarkable visual record of modern American warriors at the peaks of their defining moments. He understood the passion, skill, and audacity required for an athlete to succeed and to come face to face with their own limitations in moments of crisis and then dig down into themselves to produce that extra energy that enables them to surpass their limits and reach a new personal best. This focus on the warrior qualities of athletes gives his work a monumental and timeless feel. The viewer could be looking not only at his photograph of the Green Bay Packers linebacker, Forrest Gregg soaked in mud and exhausted, but simultaneously at a gladiator in ancient Rome. The heritage of pain and passion resurfaces in the great fleeting moments of modern sports. Riger sees it and saves it for us in his art. Athletes are some of his greatest fans because he understands their epic struggles and is rooting for them.

“Once during an interview someone listed the different qualities that marked his work, the intelligence, the anticipatory sense that came from knowing the games. Riger, not a boastful man, listened and added one more quality. ‘And caring.’” ~ David Halberstam, “The Sports Photography of Robert Riger,” Random House, 1995