The personal joys and community benefits of cultural exchange have been part of Xikun Yuan’s consciousness from childhood. Born in 1944 in southwest China’s Yunnan Province, Yuan believes that Fortune shines favor on him because he inherited artistic talent from both of his parents. Coming from a well-known family of traditional Chinese painters, Yuan demonstrated his passion for art at an early age.

Yuan focused on art throughout his school studies; however, politics broke his stride during China’s political upheavals of the 1960s. In 1966, Yuan left Yunnan Art University before graduation when the Cultural Revolution policies in China were uprooting many citizens and relocating them for training purposes coherent with the policies of the people’s revolution. Hundreds of thousands of educated people were taken out of their academic and white collar jobs and sent to rural areas to be trained by farmers in agricultural skills. However, Yuan was selected to stay in the city to paint the portrait of Chairman Mao Zedong. 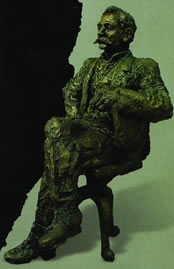 During the same time that Yuan was working on painting Chairman Mao, he was painfully aware that most of his relatives, friends, and colleagues were being uprooted against their wills, penalized for philosophical crimes, often forced to kneel in public while being denounced by representatives of the new government. In support of their plights, Yuan asked that he be sent to rural Xishuangbanna.

Fortunately, his new country life provided many beautiful inspirations for Yuan’s art. He studied a variety of animals in the wild in order t o paint them. He had a particularly memorable encounter with a tiger that gazed intensely at him at close range when surprised in the forest. Eventually, after a prolonged staring match, the tiger walked away peacefully. Yuan comments, “Thank God the tiger was probably full” (www.news.cultural-china.com; 2009). 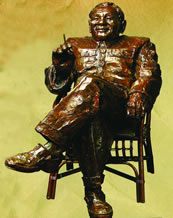 As with the careers of many artists, Yuan’s notoriety was given a boost when he left his native land and established himself as an artist in another country. In the early 1980s, Yuan married an employee of the Japanese Embassy in China, and they moved to Tokyo. There Yuan gained renown for his portrait sketches of the Japanese royal family as well as other dignitaries. In 1991, Yuan was invited to create an ink wash portrait of then Japanese Prime Minister, Toshiki Kaifu, in preparation for his upcoming official visit to China. The related media coverage of Yuan’s artwork in both Japan and China made Yuan an instant celebrity. Leaders from his native country began to take special notice of his work, and Yuan was invited to create portraits of top political figures by China’s Ministry of Foreign Affairs, various embassies, and international organizations.

To date, Yuan has painted more than 152 ink wash portraits of foreign dignitaries that earned him his moniker, “Portrait Diplomat.” As part of his effort to create portraits of great historical figures, he has also produced more than 160 sculptures of world leaders in politics, sports, and the arts. Yuan believes deeply in the social and political benefits of cultural exchange among nations. 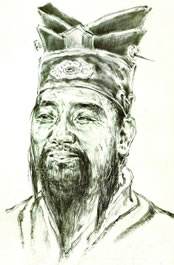 One of Yuan’s most impressive accomplishments in cultural promotion is his establishment of the Jintal Art Museum in Beijing, opened in 1996. The museum is a resting place for a valuable art collection, as well as a site available for art programs and special events that further education in the arts. Along with international festivals that improve world understanding, Yuan sees the various aspects of his work as helping to build the museum collection that showcases the cultural glories of his own heritage.

“I draw lions for money. I use the money to buy vases. I use the vases to teach children. What are the vases? They are Chinese cultural relics returned from overseas. I display them at the Jintai Art Museum. They are material things that impart the message of patriotism.” ~ Xikun Yuan; People’s Daily Online, 2/3/2005 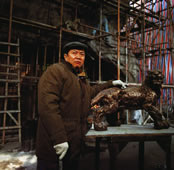 photo of Yuan with tiger bronze

Yuan’s other major international art accomplishments center around his educational projects to promote art in relation to the Olympics. One of the most notable of these efforts is the art contest in honor of the 2008 Olympics in Beijing. Initiated by the Beijing Games Organizing Committee in 2005 and overseen by Xikun Yuan as cultural ambassador, it became the largest solicitation for sculptures in Olympic history.

The goal of the contest was to assemble 29 superior landscape sculptures from around the world in honor of the 29th Olympiad, for display throughout various Olympic Games venues all over Beijing. From 90 countries, 2,400 design proposals were submitted to the Olympic judging committees. The 29 winning sculptures that formed the Beijing Olympic Sculpture Collection debuted in London and then travelled to many cities that previously had been Olympic Games hosts. The show climaxed in an exhibition at the United Nations in December 2007, and then returned to China for its grand finale Beijing display in 2008.

“The Olympics is a comprehensive event that blends sport, culture, and education. The games encourage people not only to become physically more able, but also to elevate the awareness of culture and morality. Yuan Xikun has devoted himself to this undertaking. He initiated the Olympic sculpting competition. Now he’s bringing the Olympics into communities. His efforts not only spread Olympic ideals, they also promote arts and culture.” ~ He Zhenliang, Member, International Olympic Committee (IOC)

Yuan sees all his professional efforts as part of his desire to expose more people around the world to the peaceful inspiration and enlightenment available from art. In keeping with his Chinese reverence for and understanding of the value of history, his life’s work is based on ideals coherent with ancient Confucian ethics as well as his own deep conviction that great artworks make great role models.

“I’ve always been attuned to scenes that are touching – Under the spring sun, a kindergartner leading a team of children – a mother trundling a baby carriage. They stand before my sculptures of famous people, and learn from them. I feel great comfort in that.” ~ Xikun Yuan; People’s Daily Online, 2/3/2005