“The Oracle of Environmental Art” – 2003 Sport Artist of the Year

“Arman used cast off items to make sculpture about sports, including a bicycle, a discus thrower, and an athlete patterned after Michelangelo’s ‘David.’ Contemporary sports artists have been greatly influenced by his groundbreaking environmental work.” ~ Jack Scharr, President, Fine Art Limited 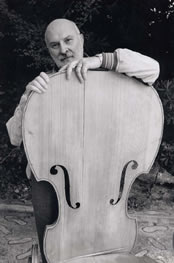 As did the Statue of Liberty in New York’s harbor, one of art’s earliest torch bearers for global ecology came from France. The sculptor called, “Arman,” born Armand Pierre Fernandez in Nice in 1928, devoted his career to spotlighting the impact that material waste had on the Earth and the healing effects of athletics and art. His monumental sculptures, some several stories high, constructed of junk and found objects became beacons lighting the way for later generations of notable sports and environmental artists.

Arman’s group, Nouveau Realisme, or New Realism emerged in the mid-1950s as a close European relative of American Pop Art. Similar to Pop Artists’ focus on advertising and comic book images, New Realism focused on a fresh understanding of the design of everyday objects and their symbolic power. Rebels with a cause, the movement’s artist members had the idealistic goals of rejuvenating the concept of art and championing humanistic principles in the face of 20th century industrial dehumanization.

“I hope to convey the concerns over the diminishing spaces and surfaces, and rampant industrial production. I would like to slow down progress and stop explosive outbreaks.” ~ Arman, Galerie Enrico Navarra Publications, p.32 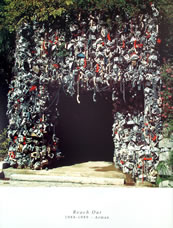 Arman took his examination of the everyday to a profound level with his radical collections or “accumulations” of manufactured objects. Discarded product packaging, piles of laundry, tangled arches made of broken phones, stacks of dented car radiators, plexiglass boxes full of wrenches and bolts, open tubes of paint with their oozing pigments pasting them to a canvas, white car wheel covers fanned out like a giant rib cage– our garbage became Arman’s “Found Art,” dynamic, muscular, and beautiful.

At first glance, many of Arman’s sculptures can look so much like the messy mounds of trash found in a family attic or an industrial warehouse that we have to look twice to figure out what’s there. That’s exactly what he wants. Look closely at the mess we’ve made. Why have we fallen so in love with manmade objects that we collect more than we can use? Are these objects barricades against an enemy or attempts to horde memories? Can anything useful and graceful be made of our excess? 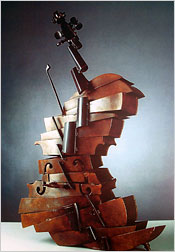 Found Art came to popular public attention in the early 1900s when the French artist, Marcel Duchamp, dubbed, “The Father of Found Art” was the first artist to mount an everyday item on a pedestal and call it “art.” He displayed a commonplace object in order to bring attention to its design and make the point that everything is worthy of an artist’s consideration. Continuing from Duchamp’s examination of everyday objects, Arman steered his work into his own investigation of mass production. Focusing his spotlight on our social manias for accumulating material objects, Arman reigns as the oracle of the Environmental Art movement of the 21st century.

In spite of the seriousness of his call for self-examination, Arman also believes that we should enjoy the whole illogical process. Held together with threads of humor as well as dismay at human foibles, his collections of familiar objects encourage us to laugh at ourselves. Along with horror at the destructive spawn of industry, Arman displays an intense respect for the ingenuity it takes to invent complex machinery and a playful delight in the process of recycling our madness into messages of sanity. His sport works convey his delight in the beauty movement as well as his firsthand understanding of the power that athletics have to conquer language limits and express universal themes. Arman’s childhood prepared him for examining the mind of the collector. Surrounded each day by valuable found objects, Arman’s father, antique dealer Antonio Fernandez worked in a shop in Nice where he repaired furniture and also practiced his beloved cello. As a child, Arman wandered through the dusty storerooms observing relics of all kinds, imagining their histories, creation, and demise. Throughout his life, Arman continued these musings, refining them into adult examinations of the modern madness of overproduction, the destruction of beauty, and the pull of familiar objects and the power of movement.

In 1946, after studying mathematics and philosophy and earning his bachelor’s degree, Arman entered the Ecole Nationale d’Art Decoratif in Nice to study painting. He also enrolled in a rigorous police course in Judo where he met the artists Yves Klein and Claude Pascal, who became his best friends. Always a dedicated athlete as well as an artist, Arman practiced judo and achieved a high degree of proficiency, even serving briefly as the bodyguard of French politician, Charles de Galle. In 1947, lazing on the beach in the south of France, nineteen-year-old Arman and his two closest friends imagined that they could each become king of a different realm of art. Yves Klein, a conceptual artist immersed in Buddhist philosophy, chose as his domain the earth’s atmosphere, and proceeded to write his signature in swooping gestures through the dreamy Mediterranean sky shimmering above them. The poet, Claude Pascal, claimed his territory as words and in the coming years would write many poems and treatises chronicling their collaborations. For his domain, Arman chose the Earth. 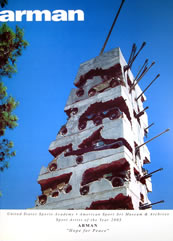 Young Arman’s focus on the solid foundation of life and how Earth is changed by material production would hold him in its thrall the rest of his life and become the source of his greatest artistic achievements. This youthful pact was to stand the three artists in good stead both creatively and professionally. Klein brainstormed the theory of “The Void,” which inspired the concepts behind all their early works. Pascal’s writings became their interpreter and publicity. Arman brought their airy artistic experimentation down to earth with his use of common objects and his steel and concrete sculptures that anchored the works in the gardens and public squares of people’s daily lives. In 1949, Arman became a student at the Ecole du Louvre in Paris, concentrating on archeology and oriental art. Furthering his athletic expertise, Arman gained the position of teacher at the Bushido Kai Judo School. Athletic and adventurous, Arman served in the military in the fabled French Foreign Legion. His combat action during the Indo-Chinese War included fighting in the Battle of Dien Bien Phu in Viet Nam. This battle was the longest, most furious battle in the Far East of the French Expeditionary Corps and is considered the defining moment of the collapse of the French colonial empire. Arman survived this nightmare in which 10,000 of his fellow Legionnaires were lost. The grim experience contributed intensity to his symbolic pleas for peace on earth in his later artworks.

His first solo art exhibitions were accomplished in the late 1950s. In 1960, Arman joined an iconoclastic group of top artists to form the movement, Nouveaux Realistes, or New Realists. In 1962, Arman began welding together found objects to create new images expressing the essence of their power. This style was dubbed, “Accumulation art.” His stop-motion accumulation sculpture of many axes fused into a descending arc titled, Avalanch, became one of his most admired and recognized symbolic works. Predominantly a social being, Arman sought camaraderie and intellectual exchange from a stimulating group of young people. His early activities were centered in political movements. A chance meeting in Nice during his stint as Charles De Gaulle’s bodyguard in 1950 shifted his focus to art. Arman met art critic Pierre Restany who introduced him to a series of artists who would later form the core of the Neo-Realist community. By the late 1950s, Arman was consistently signing his works with his first name in homage to Van Gogh, who signed his paintings, “Vincent.” By the late 1960s Arman had invented two of his most renowned art concepts: Accumulations, or collections of identical objects, and Poubelle, or collections of strewn refuse. The European art community responded with shocked admiration at Arman’s daring artistic comment on modern wastefulness. This radical first exhibition carved a place for him in the history of modern art and environmental movements.

“(Arman’s) exhibition of Plein (Full) at the Iris Clert Gallery: the gallery was filled with unsorted waste. This was the antithesis of Yves Klein’s Vide (Empty) and represented the advent of a modern language on quality and accumulation. Arman’s gesture came at the right time and, along with other artists, fell in line with historical context of the general upheaval of values. In 1960, the situation in Paris was ripe: the convergence of appropriation-based approaches led to the creation of the Neo-Realist movement of which Arman was one of the founders.” ~ (Pierre Restany; Arman, Galerie Enrico Navarra, p. 20)

The member list of Arman’s New Realist group reads like a roster of most of the important conceptual artists of the day, including: Yves Klein, Pierre Restany, Nikki de Saint Phalle, and Christo. In 1961, Arman made his U.S. art debut. His exhibition themes of “Coupes” (cut) and “Coleres” (burnt and smashed) objects focused on creativity arising from destruction. Arman had several significant exhibitions in New York before moving there.

In 1973, the Lady Liberty statue in New York’s harbor took on personal meaning for him when Arman became an American citizen. Married twice, Arman became the father of six children. His studio was the site of stimulating social and intellectual exchange as well as hard work. An influential part of the New York art scene, Arman appeared in Andy Warhol’s film, Dinner at Daley’s. In 1971, Arman married Corice Canton with whom he had a daughter, Yasmine, and a son, Philippe.

Today almost every major museum has acquired a piece by Arman, and more than 70 of his remarkable monuments are on display around the world. His 1982 Jouy-en-Josas, France monument titled, Long Term Parking, is an 18-meter-high accumulation of 60 automobiles embedded in 40,000 pounds of concrete, a wry comment on urban industrial waste. His 1995 commission from the Lebanese government titled, Hope for Peace, is a 32-meter-high monument displaying 83 tanks and military vehicles embedded in concrete. It towers as an enduring dream of entombing war machines forever. Arman’s huge sculptures inspire thoughts on the power of movement, the impressive achievements of industry and the fragility of life on earth. Wood splinters and burns to ash. Concrete breaks down into sand. Steel rusts and crumbles. Tyrants may scoff at rebellious artists, but more often than not, the voice of the visionary artist laughs last. Art is what endures most inspiringly through the centuries to tell the stories of history.

Great art can remind us of both our triumphs and our follies. Arman’s sculptures immortalize the story of our contradictions, our blind mass production of weapons and waste that exists alongside our creation of beautiful art and our enduring hopes for peace and ecological balance. Arman made his mark as an artistic innovator, an athlete and an oracle of Environmental Art for generations of sports artists to come.