On 7 August 1942, Donald Moss, a Corporal with E. Co. 2nd Battalion, 1st Marines, landed on the island of Guadalcanal where he fought in “The Battle of Tenaru,” the first major ground battle during the Pacific Campaign in World War II. After winning commendations both on Guadalcanal and The New Britain Campaigns, Moss finished up his career in the USMC on the Island of Guam. On 15 August 1945, Marine Corporal Donald Moss received first prize in Guam’s Art Exhibition for his work, “Marine Still Life.” Moss was given the blue ribbon by his friend, 1st Lt. USMC Tyrone Power, signaling the beginning of many awards and recognition for his art yet to come.

Growing up in Melrose, Mass., a small city seven miles north of Boston, Moss played sandlot baseball, hockey, and tennis. He spent summers traveling New England in search of every golf course he could play. His affection for natural beauty and sport manifested in posters he designed in high school and earned him a scholarship to Vesper George, a then prominent art school in Boston. Moss’ subsequent lifetime collection of art spans a wide range of artistic media utilizing oil, acrylic, tempera, watercolor and enamel for his representations of dramatic sports moments, places and figures. 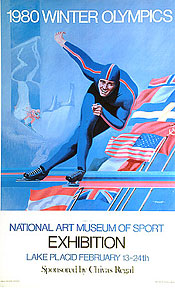 After four years with the Marines, Donald Moss returned from World War II ready to work and eager to paint. He moved to New York where he attended Pratt Institute and began work as a freelance artist and designer for magazines and ad agencies such as Colliers and Esquire. His work is recognized by tennis players, skiers, golfers, car enthusiasts, and many who watch television. His accomplishments include trademarks and logos for AMF/Head racquets, Olin Skis, the American Broadcasting Company (ABC), and Mercedes-Benz. In 1978, Moss was commissioned to design the official poster for Super Bowl XII. Six million prints of the poster design were distributed nationwide bearing his name. His work has been commissioned by, among others, Arnold Palmer Enterprises, Golf Digest and Sports Illustrated.

Moss has maintained an amicable relationship with friend and fellow Marine, Dr. T. P. Rosandich. His contributions to the American Sport Art Museum and Archives (ASAMA) and the United States Sports Academy include a number of paintings, prints, and posters. True to the mission of ASAMA, students and visitors to the Daphne, Ala., campus are welcome to become part of Moss’ artwork. Moss said,

“I want to bring out the life in the scene so that a golfer or an observer who has seen the course or the event can look at the painting and mentally put himself there. I know I’ve been successful when the viewer says, ‘I was there, and I can appreciate that painting.’” 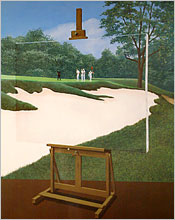 The 15th at Oakmont

But even a viewer who has not seen firsthand the famed 13th hole at Augusta or the 14th at Mahogany Run in the US Virgin Islands—both available for viewing in the ASAMA collection—can appreciate the affectionate splendor of Moss’ painted interpretations of them.

After a unanimous vote to select Moss as 1985 Sport Artist of the Year, Academy President and CEO Dr. Thomas P. Rosandich wrote,

“All of us are overwhelmed by the great spectrum of his art, from the abstracts on the Sports Illustrated cover, to the quiet stillness of a hunting scene, and all skiing and golf in between, let alone twelve commemorative stamps.”

Donald Moss was recognized for his achievements on 25 April 1986 at a black tie event at the Riverview Plaza in Mobile, Ala. In a tuxedo with an Academy pin on his lapel, Moss mingled with national and Mobile elite at the $100 per plate sit-down dinner. 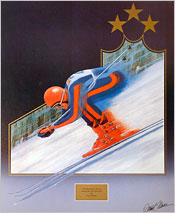 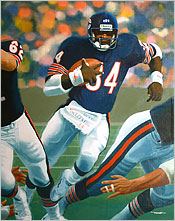