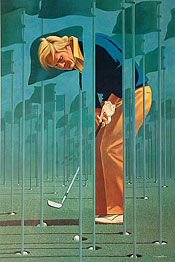 Moss’ work has been called “romantic,” “versatile” and “dramatic.” “I constantly strive to render the drama of sport in my art,” Moss said. “To have a great painting—particularly in sport art—you must get that incredible intensity of the athlete’s expression. That’s what I try to capture.” Perhaps no better painting demonstrates Moss’ philosophy than the oil painting of “Sweetness,” depicting Walter Payton, the Academy’s 1985 Male Athlete of the Year, featured in the Academy’s Sport Artist of the Year Hall of Fame. In the painting, Payton is deftly dodging the opposing team, and beneath the shadow of his helmet, one can see the intensity on his face and the wide-open alertness in his eyes. In addition to his prolific contributions to the art world, it is the ability to capture these kinds of emotions, this instantaneous mixture of movement and intensity not attainable by photograph, that make Moss’ art both accessible and significant. As part of the extensive ASAMA collection, students and visitors will forever be reminded of the interrelationship between the discipline, creativity, and hard work required for academics, sport, and art as demonstrated by the artwork of 1985 Sport Artist of the Year, Donald Moss. 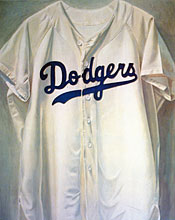 Moss was assigned to paint surreal paintings of professional golfers putting for Sports Illustrated. With this technique, he forced the juxtaposition of the usual and unusual. He heard golfer Lee Trevino say, “Sometimes I come apart when I putt,” and Moss used surrealism to illustrate a literal representation of the metaphor. In the painting, Trevino appears to be literally coming apart. In a surreal painting of Jack Nicklaus, the golfer is surrounded by flag pins and holes, every one of them with a sunken golf ball. “Jack Nicklaus could make anything,” Moss said. While he interpreted the reputations and sayings of the golfers for his surreal paintings, Moss also believed in the dream-like qualities of the style. “Sometimes you paint things and you really won’t have a definite reason,” he said.

For 30 years, beginning one month after the initial launch of Sports Illustrated, until his final cover art on 12 November 1984, Moss was the magazine’s premier illustrator. Moss painted more covers and editorial illustrations for that magazine than any American painter. A devoted skier, Moss skied the trails he painted for Sports Illustrated, often from the racer’s point of view or from mountain aerials. Because Sports Illustrated art director Dick Gangel liked for his artists to experience their assignments, Moss was exposed to a variety of sports experiences. In addition to skiing, Moss played many rounds of golf for his renowned “Best 18 Golf Holes in America,” and photographed sports greats like tennis player Jimmy Connors, professional baseball players, and famous NHL stars on ice for his acrylic series. He notably spent from early morning to late afternoon taking hundreds of photographs of his subjects at all conceivable angles. He admitted to sometimes working 14 or 15 hours in a day.

“I immerse myself in research,” Moss said.

The piece for Sports Illustrated that Moss felt most emotionally attached to was also his first cover, from the Kentucky Derby, published on 4 May 1964. The cover is done in trompe l’oeil style, creating the optical illusion that the object of the painting, in this case a flyer for the Kentucky Derby posted on a wooden planked surface, is in 3D. At Sports Illustrated, Moss was afforded the opportunity to experiment with other artistic techniques. His meticulously honest illustrations of everyday life suggest influences of the artistic movement of realism. Influenced by French Impressionist painter Cherot, Moss’ other works employ a phenomenon that relies on a viewer’s perception to distinguish a familiar image from a series of colors in a technique known as pointillism. In tune with the art trends of the 1950s, Moss also exploited the context of familiar commercial images, specifically baseball players, consistent with the artistic style of pop art. Inspired by Magritte, a surrealist painter and innovator, Moss used surrealism to “catch something that cannot be photographed,” or the emotional truths of the sporting moment. “Surrealism is very cerebral,” Moss said. “It gets inside you.”