“You love calligraphy and pursue her but you can never reach her. Nevertheless, the pursuit itself is the most wonderful process.” ~ Gu Gan, The Three Steps of Modern Calligraphy, p.3, 2005 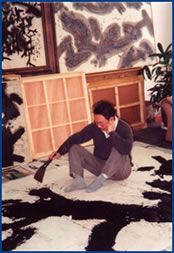 As with all the finer things in life, the more time one spends in the company of Gu Gan’s remarkable artworks, the more they delight the senses, and the more deeply their subtle messages and mysteries communicate. Because Gu Gan’s works are multi-layered with different visions portrayed in each layer, the finished works give the viewer the opportunity for a wide variety of experiences. The paintings and prints on handmade paper can be enjoyed as decorative art for their beauty of line, color, and texture. Gu Gan’s works can be appreciated for their presentations of historic Chinese art forms combined with contemporary innovations. His writings and pictographs can be deciphered for the stories and the messages that they convey. All perspectives in the visions by this master of Indigenous Modernism are enriching as they invite the viewer to explore all available realms of perception, engaging body, mind, and spirit.

“Calligraphy is the artistry of profundity and skilled mystery.” ~Wang Xizhi, On Calligraphy (13th Century) 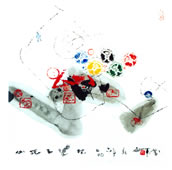 Heart Beats with the Five Rings

Gu Gan was born in Changsha in the Hunan Province of China in 1942. He attended Central Academy of Fine Arts in Beijing. For 10 years during China’s Cultural Revolution of the mid-1900s, he served in the printing industry. Gu Gan also studied painting and calligraphy with Ye Qianye, Huang Miaozi, and Zhang Zhengyu. In 1978, he became an elected member of the Research Academy for Traditional Chinese painting under the Chinese Ministry of Culture. In 1985, he organized the First Exhibition of Chinese Modern Calligraphy. He has also designed wine labels for Mouton Rothschild.

In the 1980s, he became engrossed in the study of the I Ching, a philosophy that emphasizes harmony of man with nature and man with society. From the point of view of I Ching theory, man’s natural state is the most purely spiritual one. This view led Gu Gan to study primitive pictographs and other ancient forms of writing from more natural cultures than our contemporary urban societies.

Gu Gan’s decision to shift his artwork from specific human-centered images to more generalized text-centered images expresses the philosophy that focusing on healthy group existence within nature over individual demands will keep our thoughts and actions closer in tune with natural universal laws. This approach combines traditional Confucian and Taoist theories with modern attitudes. To create art based on these theories, the painter goes into a meditative state, letting go of the idea of his or her individual existence and imagining an idealistic world shaped by pure aesthetics. This ideal inner universe is a source of great creativity. Paintings born from this state of mind become messages from the spiritual core of the artist. Though less based on spiritual values than on psychological insights, the Expressionists of Western art in the 1900s practiced gestural painting from a similar theoretical base to immerse themselves in their subconscious and create freely from this vantage point. 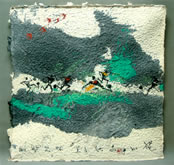 With some similarities to the process of secular Western gestural art, the process of making traditional Chinese calligraphy requires that the artist embody the universal spiritual values while working. The artist allows the spirit of the subject to guide arm and brush as the ink is applied in varying intensities and shapes. Hopefully, each stroke embodies its meaning. Calligraphy executed well becomes a performance art that expresses ideas about life, time, and space in the strokes as the artist applies the paints.

By combining ancient and contemporary concepts and pictographs, Gu Gan works to create an universal language accessible to anyone. Gu Gan’s wife invented the phrase, ‘Indigenous Modernist,’ to describe his artistic style defined by his powerful fusion of traditional values and primitive totems with contemporary techniques and topics.

“An excellent artist must store all the useful knowledge either ancient or present, foreign or Chinese, analyze them in relation to the development of philosophy, aesthetics, religion, psychology and history… then form a vehicle tallying with our new concepts – modern calligraphy.” ~ Gu Gan, The Three Steps of Modern Calligraphy, p.5 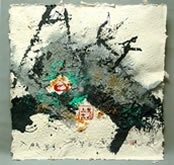 Gu Gan was one of the major forerunners of the Modernist Movement in China. He became chairman of the distinguished Modern Calligraphy and Painting Society in China and has given lectures at prestigious institutions around the world, including the University of Bonn and the Fine Art Institute in Hamburg, Germany. To honor the 2008 Olympics, Gu Gan created a series of 33 sport calligraphy paintings. One artwork depicting the five Olympic rings was created to commemorate the 2008 Olympic Games hosted by Beijing. Also in 2008, the United States Sports Academy honored Gu Gan as the Sport Artist of the Year. 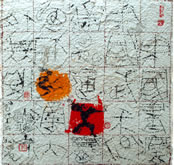 While Western traditional philosophies separate seemingly opposite elements such as words and pictures, mind and body, thought and action, creativity and destruction, Eastern traditional philosophies see opposites as points cycling along a continuum without separation. To Gu Gan, writing calligraphy and painting pictures are no different. Invoking ancient signs and techniques from indigenous art, Gu Gan strives to bring the harmony with nature and society idealized by traditional Chinese philosophies into the urbanized everyday world of contemporary people.

To express his ideas clearly, Gu Gan uses painted shapes and symbols combined with Chinese characters to form his powerful visual language. Gu Gan’s meditative art is a voice for world harmony as new as today and as old as time.