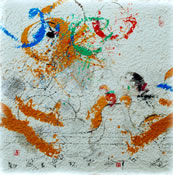 Gu Gan’s artworks have been shown worldwide in prestigious venues such as the British Museum in London, England; the Museum for Eastern Art in Cologne, Germany; the Fine Art Institute in Hamburg, Germany; the Vienna Art Museum, Austria; and the China National Art Museum. Gu Gan is a member of the China Association of Artists and an Honorary Member of the World Association of Calligraphers.

His books include: From Figurative Art to Abstract and Dictionary of Modern Calligraphy. In 2003, a luxury boxed edition of a collection of Gu Gan’s works was published by Up-Front Books of Tokyo, Japan.

“The reason why I have written this book is to link up China and the West in the skill and conception of the artistry of calligraphy and to analyze and study the artistry on the level of world culture. This may be some help for Chinese to absorb nutrition from abroad, as Chinese take Kentucky Fried Chicken in Beijing.”

Among many significant works by Gu Gan, four large masterly paintings on highly textured handmade paper stand out for their beauty and relevance to sports history. They hang in the American Sport Art Museum and Archives in Daphne, Alabama. They were painted in honor of the 2008 Olympic Games hosted by China in Beijing and are titled: Playing in the Waves, Long Live Sports, Popular Soccer, and Running toward the Light. A good deal of Chinese character text is included in many of Gu Gan’s paintings. The writing is traditional, pre-Cultural Revolution style that is enough different from current Chinese character style that it is sometimes hard for young viewers to read fully. This nod to traditional culture enriches the historic elements of his work and adds mystery and beauty. Teaching Assistant, Yu-Hsin Li at the United States Sports Academy has translated some of the Chinese text in Gu Gan’s paintings to help viewers on the campus understand the symbols. 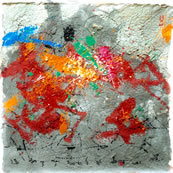 The theme of the painting titled, Playing in the Waves, is water sports. Cradled by the immense ocean, playful images of women and fish navigate the bright, textured surface. Almost all of Gu Gan’s paintings include several stamped seals within the picture. Gu Gan has high regard for the exacting structure of seal designs and calls the practice “a miniature super art.” The theme of the painting titled, Long Live Sports, is training for various martial arts and other sports and the positive results gained from developing power, speed, and strength. The surface is painted mostly dark grey with large strokes of red and smaller strokes of green and yellow paint. Chinese calligraphy and the martial arts are considered to be closely related. Practitioners of both disciplines seek to synchronize their movements with the patterns and rhythms of universal energy. Calligraphy paintings are valued for their ability to represent and evoke the shapes of nature and life energy. Martial arts positions and movements are performed in patterns symbolic of natural forces and achieve power only if the practitioner succeeds in moving in sync with universal patterns. 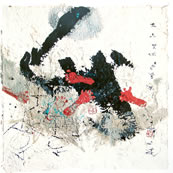 The theme of Popular Soccer is the sport of its title. Over a background of black and grey paint strokes, several large human footprints in brick red paint stride boldly across the surface. The theme of Running toward the Light is the carrying of the Olympic torch and striving for all the values for which it stands. Escorted festively by a flock of white birds, small figures in a line run from left to right across the middle of the painting into an area of bright yellow. High behind them rises an impressive shape of a mountain.

“The artistry of Chinese calligraphy differs from all other forms such as painting, music, architecture, film, drama, dance, literature, either Chinese or foreign, because there is no definite mode of thinking… no definite way of practice…There is the largest room for enjoyment because… you can never fully understand her.” ~ Gu Gan, The Three Steps of Modern Calligraphy, p.3 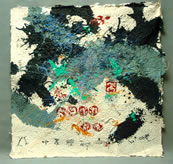 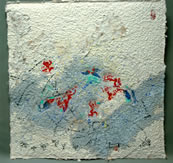 Playing in the Wave