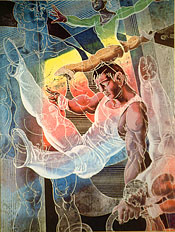 Ebie Taylor, executive director of ASAMA at the time, said of Erni, “His sport paintings are a reflection of the beauty of movement and his eye for the mythological aspect of sport gives his work an amazing vitality.”

When viewing one of Erni’s sport art works, one can almost visualize the technical process that goes into every competition he captures. Erni’s painting of basketball players conjures images of men soaring to grab a loose ball, each man in the image with their muscle definition impressively on display thanks to Erni’s use of distinctive, white lines in all the appropriate places.

The color use in the background gives the image a dreamy feeling. The people who are viewing it are being taken inside the human body, to experience its twists and turns while competing on the basketball court. The image of a bobsled team preparing to go down the hill effectively captures that moment just before launch, when a mass of humanity flawlessly climbs into a small space inside a sleek machine that reaches speeds up to 90 mph while heading straight down a thin, icy path.

Erni brought science to art, helped us see the technical aspects behind the amazing athletes we love to watch on our televisions and spend our hard-earned dollars to see toil.

Hans Erni celebrated his 100th birthday on 21 February 2009. To celebrate a century’s worth of amazing art, the Museum of Art Lucerne presented “Hans Erni: Retrospective for his 100th birthday.” It presented 230 works, including a Swiss-themed exhibition that stands 91 meters long and five meters tall.

Even to this day, Erni keeps producing amazing pieces of work. To help kick off another century of wonderment, the United Nations in Geneva inaugurated an Erni mural that covers a plain concrete wall that was erected for security purposes after the attacks on America on 11 September 2001. Appropriately enough, the 60-meter long ceramic fresco depicts the hope for peace.

“I want all those people going in there to work every day to see it and think about peace,” Erni told journalists after the mural was inaugurated. “I want them to be inspired.”

There is little doubt that a century from now, Erni’s wish will remain a reality.