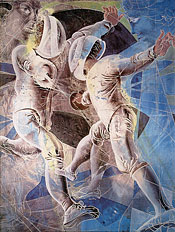 As Erni was affiliated with the Abstract Alliance, he was among the pioneers of the Abstract Expressionist Movement. Erni’s works reflect the style associated with the movement, reshaping the familiar with the intention of expression. His art is less concerned with the visual likeness to real world objects than with the expressive interpretation of them.

But, in this form it is a paradox. As a member of the Abstract Alliance and pioneer of the Abstract Expressionist Movement, Erni declared, “There is no abstract! There is only reality! What we call abstract is only reality as we see it at the time we paint. The next time we paint, we may see it differently.”2 The paradox reaffirms the philosophical teachings of Wölfflin, that even a work with little or no visual likeness to its subject is derived from the knowledge of the subject. 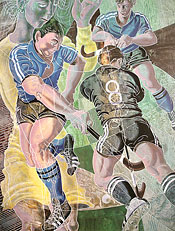 Thus, reality was the inspiration for even Erni’s most abstract works. “What is happening today is full of content and cannot be conceived by a play of colors without form, or by forms without meaning,” Erni said. “Let us have the courage for continuity of meaning in painting, for balanced humanity and tradition.” This allowed Erni to create the “realistic yet mythical” art for which he is renowned.

Erni believed that “Painting is not passive. It strives to convince and it testifies.” And so, his works took on a cause. That cause, whether it be in depicting mythological athletes or heroes on postage stamps, was the celebration of human life. It is, as Erni said, the “responsibility of art to describe the world and science through the realistic skills of illustration.” 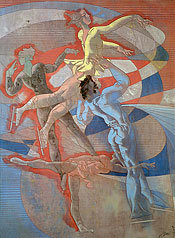 For a man who witnessed the ravages of war, who tirelessly traveled the world in search of knowledge, and who maintained incredible productivity throughout his art career, Erni retained an impressive work ethic and energy. Even at the age of 90, Erni could be found in his studio working on several projects at once. With an appearance described “rugged athlete,” Erni attributed his “indomitable vitality” to his interest in sports. In his youth, he played hockey and liked to ski. His experience in sports and constant attention to the human experience gave Erni a considerable edge in eligibility for Sport Artist of the Year.