Ridlon discovered painting while in the sixth grade. It was then, too, that he began to collect things. “I was poor and scrounged around for objects I could use. It was fashionable to use found objects,” he said.2 It was a modest beginning. Yet, Ridlon visited flea markets, garage sales and antique shops to satisfy his fascination with things.

As he got older, Ridlon learned to control his stuttering problem and developed into a talented artist and athlete. “I had an excellent art teacher, and I had become a good athlete,” he said. “I came from a very poor family—my father’s people were all lobster fishermen in Maine—and if it hadn’t been for football, I might well have become a coal miner or something like that.” 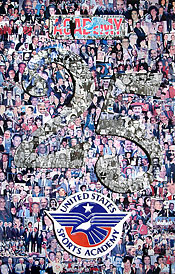 Instead of mining coal, Ridlon mined his athletic ability and received an athletic scholarship to Syracuse University, giving him an opportunity he might otherwise not have had. From 1954 to 1957 Ridlon played halfback and defensive end for Syracuse University’s football team. “I felt there was a perfect democracy on the field. If you’re faster, you’re better,” he said.

While at Syracuse, Ridlon won the Pat Miller Award for Outstanding Athlete-Citizen-Student and the Joe Alexander Award for Excellence in Football, Scholarship and Citizenship. “I’m very proud I was a good athlete,” Ridlon said. “I played in the same backfield with Jim Brown, and that was an honor.”

Playing football at Syracuse laid the foundation for Ridlon’s future professional football career, “But it was at Syracuse I realized that I also had a mind,” he said. At Syracuse, Ridlon studied under Ivan Meštrović, a prominent Croatian sculptor known worldwide whose works had close ties to Slavic history. Ridlon graduated from Syracuse with a Bachelor of Fine Arts degree in sculpture. At the time, Ridlon said he “didn’t know there even was pro football after college.”

Ridlon played six years with the San Francisco 49ers and two years with the Dallas Cowboys. As a Cowboy, he was named All-Pro as a defensive safety in 1964. An article in the 9 January 1989 Sports Illustrated magazine states, “Jim Ridlon was one of the first tough-as-nails NFL defensive backs in the 1950s and 60s, a rugged tackler and, though not especially fast, a dogged pass defender.” Then, suddenly, at what some called the peak of his career, Ridlon quit pro football and went back to Syracuse to complete his graduate studies. 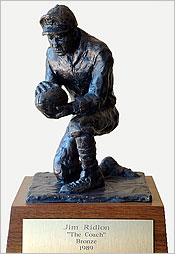 While continuing his work in fine art, he coached the university’s defensive backs. Later, Ridlon became a full-time professor at the College of Visual and Performing Arts at Syracuse and taught painting, figure drawing, sculpture and design, until he retired in 2000. All the while, Ridlon worked as the color commentator for Syracuse home football games on the New York State Radio Network.